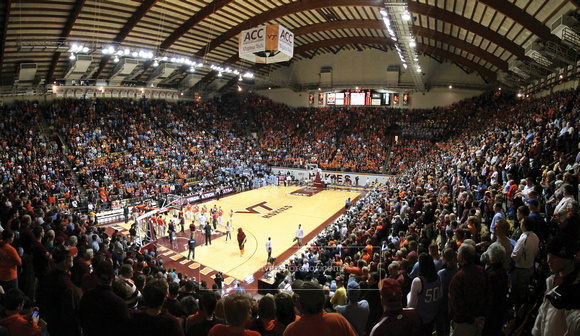 BLACKSBURG, Va. – Virginia Tech will host Northwestern on Tuesday, Dec. 1, in the 17th annual Big Ten/ACC Challenge. Game time and ESPN network designation will be announced at a later date.

ESPN, ESPN2 and ESPNU will combine to televise all 14 games of the event matching top college basketball programs playing for conference supremacy and the Commissioner’s Cup. All 14 games will also be available via WatchESPN.

Nine programs competing in the Challenge are ranked in an ESPN.com early preseason top 25 poll, highlighted by four of the top seven: No. 2 North Carolina, No. 4 Maryland, No. 5 Virginia, No. 7 Duke, No. 12 Michigan State, No. 13 Notre Dame, No. 14 Indiana, No. 21 Louisville and No. 25 Wisconsin. Three of the games will pit teams in the early rankings against each other: No. 4 Maryland at No. 2 North Carolina, No. 14 Indiana at No. 7 Duke and No. 21 Louisville at No. 12 Michigan State. Thirteen teams that played in the 2015 NCAA Championship will compete in the Challenge.

The Big Ten captured the Commissioner’s Cup last season, winning eight of the 14 matchups. The two conferences split the previous two events, winning six Challenge games each in 2012 and 2013. The ACC won the first 10 Challenges (1999-2008) while the Big Ten won the next three (2009-2011). In the event of a tie, the Commissioner’s Cup remains with the conference that won the previous year.

(times and networks will be announced in August)

No. 4 Maryland at No. 2 North Carolina

No. 5 Virginia at Ohio State

No. 13 Notre Dame at Illinois

No. 25 Wisconsin at Syracuse