It’s been an ugly, mostly-boring first half, with the only highlight for the Hokies being two interceptions by Kendall Fuller, who nearly had two more. Duke leads 6-0 on a field goals of 51 and 53 yards by Ross Martin.

The big story of the first half offensively for the Hokies is a poor performance from QB Logan Thomas, who completed his first four passes for 25 yards, but then went into the tank and finished the half 9-18 with two interceptions. One of Logan’s interceptions was particularly damaging, as it came in the Duke end zone on third and goal from the 7 with four minutes left in the half. DJ Coles had scored on the previous play, but Coles was called for an illegal shift, wiping out the score, and Thomas threw his pick on the next play, under duress.

Logan has 45 yards rushing to go with his 82 yards passing, and the Hokies have 179 yards as a team, but they put up a goose egg on the scoreboard. Field position has been a problem, despite three interceptions by the Hokies. Tech started drives on their own 35, 46, 18, 10, 16, 25 and 17. They were unable to convert any of the long fields into points. In addition to Thomas’ interception in the end zone, Tech kicker Cody Journell banged a 45 yard field goal off the upright with less than a minute to go in the half.

Duke quarterback Anthony Boone hasn’t been much better, going just 7-19 and missing star wide receiver Jamison Crowder twice when Crowder was open behind the Tech defense. But Boone did complete his last three passes of the first half to drive the Blue Devils from their own 28 with 42 seconds left into range for Martin’s 53-yard field goal as time expired in the half.

Martin’s 51-yard field goal came early in the second quarter, when Duke took possession on their own 45 after a Tech punt, moved it to the Tech 33, and connected from there.

Kendall Fuller’s first interception came at the Hokie 46 in the first quarter, and Tech moved the ball down to the Duke 31, then failed to convert a 4th and 11. Tech’s other two interceptions were at the VT 10 yard line by Fuller, and at the VT 17 yard line by Dadi Nicolas, off a tip by Tariq Edwards.

Overall, it’s the type of game the Hokies can’t afford. They are losing the field position battle, they have two turnovers, and they’re not making plays, other than a few interceptions that haven’t benefitted them. Meanwhile, though Duke is getting generally horrible quarterback play, they have gotten two big plays from their kicker, converting to field goals longer than 50 yards.

• Tech is wearing maroon helmets, orange jerseys and orange pants for just the second time under head coach Frank Beamer. The only other time Tech wore this combination was in 1994, a 42-23 loss at home to Virginia. The Hokies are wearing orange today for the annual Orange Effect game sponsored by the SGA.

• J.R. Collins and Deon Clarke are not dressed for today’s game. Head coach Frank Beamer will make a statement regarding the situation after the game.

• Kyle Fuller (groin) saw his 34-game start streak end today when he wasn’t on the field for the opening defensive play of the game. The last game the senior didn’t start was the 2011 Orange Bowl against Stanford. He did play on special teams.

• Freshman Chuck Clark got his first start of his career, coming as a nickel back in Tech’s defensive formation. Kendall Fuller slid to one cornerback spot and Antone Exum made his 2013 debut, starting opposite Fuller, after suffering a knee injury in January.

• Dadi Nicolas made his first collegiate start, coming in place of J.R. Collins.

• Logan Thomas threw a first-quarter interception, snapping his streak of no picks at 116 consecutive passes. His career long remains at 120 passes, set in 2011. Thomas has never gone four straight complete games without an interception in his college career.

• True freshman Kendall Fuller had a career-high two interceptions in the first half to give him four for the season. Tech’s true freshman combo of Fuller and Brandon Facyson have combined for eight interceptions this year. Both of them have four, tying the freshman interception record under Beamer of four set by Eric Green in 2000.

• Defensive tackle Derrick Hopkins saw one play at fullback in the first half, the first offensive snaps of his career.

• Dadi Nicolas recorded his first career interception, coming toward the end of the first half. It was the third interception of the half for the Hokies, giving them 16 for the season. Tech has recorded three interceptions in a game two other times this year – against Western Carolina and East Carolina.

• The last time Tech was held scoreless in the first half was last year’s Russell Athletic Bowl against Rutgers. The Hokies trailed 10-0 but won 13-10 in overtime. 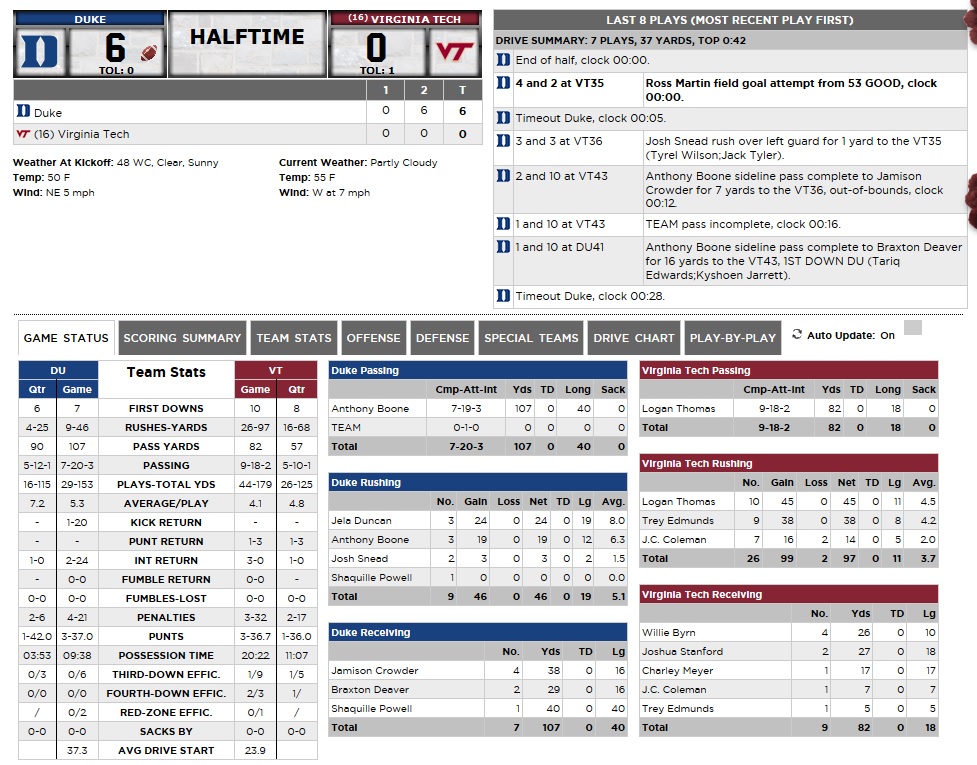