It’s rare that I sit down to do a Monday Thoughts and feel uninspired.

I know that in recent years you have come to expect a different viewpoint, a stream of quirkiness and often downright humor here in MT. If you go back and look at the stuff I used to write years ago, it was crammed full of all sorts of detail about down and distance, play calls, key stats and moments from the game – very intense stuff directly related to game action. Then I would philosophize to close out the article.

In recent years, as the post-game analysis other TSL writers were doing got more and more detailed and impressive, and the TSL Podcast started squeezing me for time (especially since we started to do a Monday edition), I no longer had the ability to watch every game in detail and analyze it down to the nth degree. Plus, others were just flat better at it.

I started opining to Chris Coleman that I thought things were passing me by, and that I didn’t think that kind of stuff was in my wheelhouse anymore. “Well,” he said, “you call it Monday Thoughts. Literally just give us your Monday Thoughts.”

I started doing that, and I think it has transitioned nicely over the years into something that people find interesting, sometimes illuminating, and often odd.

So what am I thinking this Monday? Not much new.

Preparing for this game was interesting. I was going to pick Virginia Tech to win, because the conventional wisdom is that “Georgia Tech sucks,” and starting QB Jeff Sims was dicey.

Somewhere along the way, though, I started to get a bad feeling. It’s hard to describe. As the game got closer, it looked as if Sims was going to play, and that affected my thinking, but other than that, I can’t put my finger on it.

As I read through Chris Coleman’s preview last Tuesday, I went from thinking “Virginia Tech’s going to win” to thinking, “Eh. I don’t think so.”

It all came to a head when I went to the Virginia Tech stats summary on stats.ncaa.org and saw last week’s version of this: 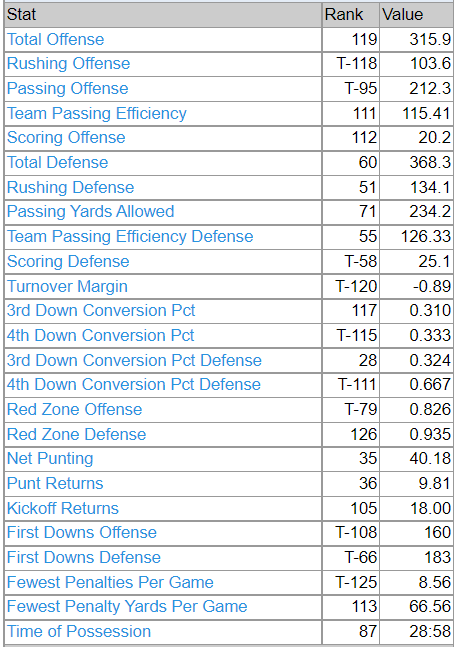 That’s a snapshot of Virginia Tech’s statistical ranking in various categories out of 131 FBS teams.

It paints a very grim picture. The Hokies rank outside the top 100 in 13 of 24 listed categories. I looked at that while working on last week’s game preview, and I did what you can’t afford to do: I lost hope.

I figured Virginia Tech would find a way to lose, and unfortunately, I wound up being correct. I don’t take any pleasure whatsoever in being right.

This time, it was turnovers and placekicking. Grant Wells and his tailback (I think it was Keshawn King) mishandled the mesh and dropped the ball on Georgia Tech’s 22-yard line on second and one with the Hokies trailing 7-0. Get a clean handoff there, it’s likely a first down, and it likely ends up in a score.