On Tuesday, the ACC announced a new scheduling format for football. No more Coastal Chaos. Beginning in 2023, the Atlantic and Coastal Divisions will be no more as the league moves to a 3-5-5 scheduling format. Like most fanbases in the ACC, there’s both good and bad news for Virginia Tech football fans.

From 2023 through 2026, each ACC program will have three annual opponents they will play every year. The other teams in the league will rotate, and in the end, every team will be guaranteed to play every other league member twice over a four-year stretch. 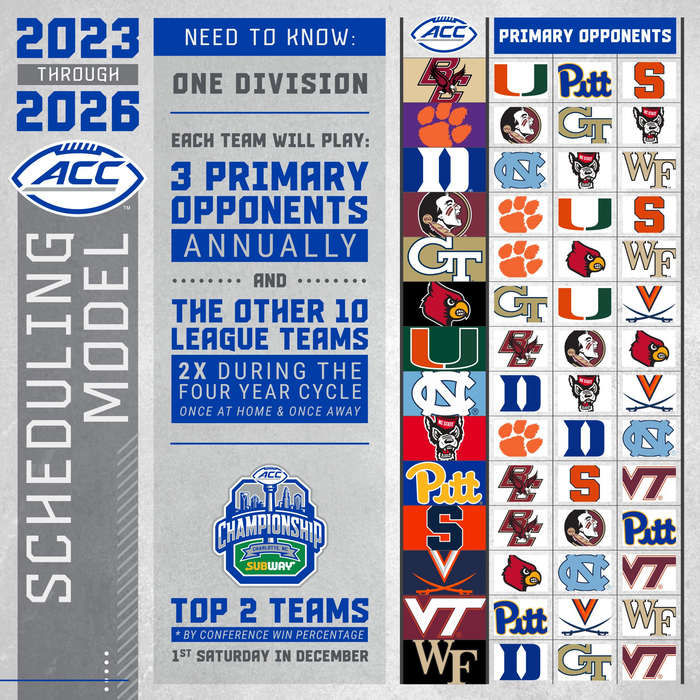 Virginia Tech’s annual opponents during that four-year stretch are Virginia, Wake Forest and Pitt. The Hokies will play the Cavaliers, Demon Deacons and Panthers every year, while the other 10 teams in the league will be part of the rotation. There are pluses and minuses to this scheduling format, which we’ll get into in today’s article.

Before we get into it though, I’d first like to point out that in this era of super conferences, there’s no way to make everybody happy with scheduling, and there’s no way to make a perfectly balanced format for a 14-team league. I know that everyone already knows that, and it doesn’t mean we can’t complain about certain things, but remember that other fanbases are probably complaining about some things as well. It’s not just us.

With that, let’s get into it…

The Downside: Less Miami and UNC

When the scheduling model was announced, the first thing I did was check Virginia Tech’s three crossover opponents. UVA was a given, but we didn’t know what to expect with the other two spots. The first thing I (and probably you, too) noticed was no Boston College…and there was much rejoicing.

After that, my enthusiasm dropped a little bit. The other two spots weren’t occupied by Miami and North Carolina. I wasn’t expecting both of them to be on there, but I thought one of the two would be nice. Instead we got Pitt and Wake Forest. Pitt. Ugh. More trips to Heinz Field every other year. Yay!

The whole Miami thing bothers some folks more than others. I think it particularly bothers the former players who played back in the 90s and early 2000s. Those games were intense, and they always meant a lot. Virginia Tech vs. Miami had huge repercussions in the Big East title race back in the day, and the game soon became very important on a national scale as well. Matchups from 1999 through 2005 featured at least one top 10 team in each game, including two top-five contests.