Today we’ll switch sides of the ball and look at some Virginia Tech defensive targets for the 2023 recruiting class.

Click here for the accompanying offensive recruiting article, which was published on Tuesday.

As usual with big recruiting articles like this, our qualifier: with schools literally “offering” hundreds of prospects these days, it’s impossible to know at all times who the top targets on the board are, or who else is actively recruiting them. This article represents Tech Sideline’s best guess at this time. Some of it will prove to be right, and some of it will prove to be wrong.

Virginia Tech picked up a commitment from Richmond defensive end Jason Abbey last weekend. Abbey is rated the No. 33 player in the state by 247, but On3 rates him as the No. 9 prospect in Virginia. That tells me that either both sites have vastly different points of view on his abilities or that 247 hasn’t evaluated him yet. I suspect it’s some of both, as there are also a few guys who aren’t On3’s list who I would have on mine.

I really don’t know where Abbey would rank on most schools’ boards, but I think he’s a very good get for the Tech scheme. He looks like the quickest defensive end in the state of Virginia this year, and he’s most physical than you would expect. This is an old-school type of Tech defensive end signing.

Highland Springs defensive end Miles Greene visited Blacksburg for the Spring Game. I’ve always liked Greene quite a bit. Most of the recruiting sites still list him in the 240-245 range, with the exception of On3, which lists him at 255. In his most recent picture (below) I thought he looked bigger than his previously listed size. With a full 13 months left in high school, it’s possible that Greene could be viewed as a defensive tackle before it’s all said and done, just like his former teammate Rashaud Pernell, but for now I’ll leave him at defensive end until we get some clarification on his current weight.

Ronel Nukah, nicknamed “Nuke,” is from Philadelphia, and he was originally offered by Penn State when Brent Pry was their defensive coordinator. It’s unknown whether that PSU offer is still valid, but he is also listed with offers from Tennessee and Marshall, as well as the Hokies. His recruitment seems very quiet for now, but if his Twitter page is any indicator, he certainly enjoyed his visit to Blacksburg. 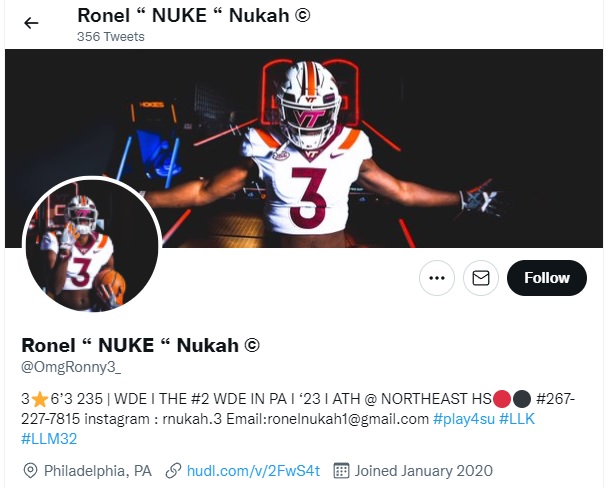 Mason Robinson is a defensive end from the McDonogh School in Maryland, and he’s ranked as the No. 10 prospect in the state. Virginia Tech and Penn State are both recruiting him hard. Miami, Georgia, South Carolina, Oklahoma and Tennessee are among some of his other offers, though these