While everyone rightfully celebrates the Joe Rudolph hire and looks ahead to the future, I want to talk about bowl games before moving on.

No, I don’t want to talk about the bowl game, the Pinstripe Bowl. That was a forgettable affair, so forgettable that I’ve actually forgotten what happened in it. I remember VT as being somewhat competitive early, despite Maryland’s punt return, but eventually things collapsed and the Terps ground the Hokies into the turf, 54-10.

Man, that’s one hell of an ending to the Justin Fuente era. The Hokies are scraping rock bottom. We hope.

At this point, many of us are questioning everything. But I still believe this program should be way better than this. Searching the VT Football stats database [1987-on] for most points scored against Virginia Tech, you find that out of the top 21 scoring efforts against the Hokies since 1987, nearly half of them (10) came against Justin Fuente’s teams. And I’m counting this bowl team as Justin Fuente’s team, even though he had been fired. 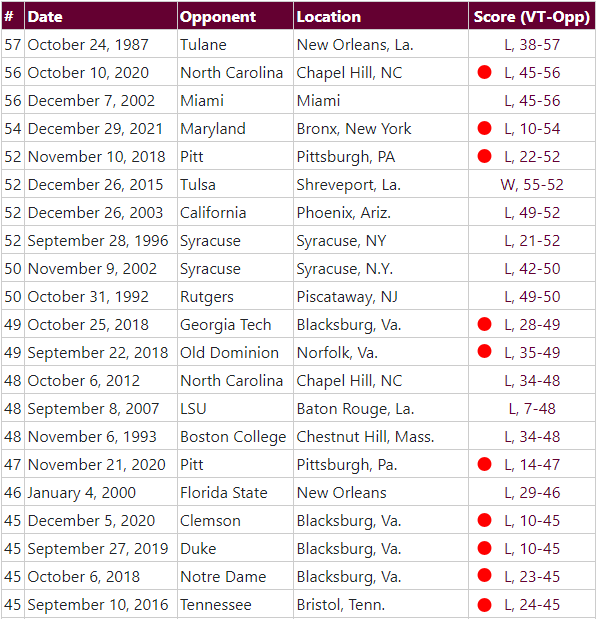 Note that the location “Blacksburg, VA” only appears on that list four times, and all four teams were Fuente-coached teams.

That’s a lack of toughness, preparation, and culture. Any team can have a bad day, and there are a lot of good Virginia Tech teams that appear on that list, but that’s too many appearances on that list by teams from the last six years.

Virginia Tech will see Maryland again, in a four-game series scheduled for 2026-2029. When that happens, it’s worth remembering these tweets from the official Maryland account:

This is a straight up beatdown.

“We are gonna play a great brand of defense”