Last week we looked at keys and tip-offs in a general sense. Now, let’s look at keys in the very specific context of Bud Foster’s Bear front at Virginia Tech. We’re going to focus on “peak-Bear” in 2014, when the scheme was new and causing lots of early-season headaches for opposing offenses. Fortunately, we know a lot about Foster’s thinking with the Bear front thanks to X and O Labs, which came on campus to interview Foster and watch the Hokies’ operations several years ago.

The Bear front was implemented to handle QB runs. Putting five guys on the LOS helped eliminate double-teams and stressed backside blockers on pull schemes. One of the trade-offs was that it locked-in a big chunk of the defense into a static alignment, which made the scheme tougher to tweak and easier to predict.

One of the formations it was meant to specifically attack was single-back Y-Off formations, named so because the Y receiver is a box player who is off the line-of-scrimmage. In these formations that Y-receiver (almost always a TE or H-back) lines up anywhere from a wingback to a sniffer to a fullback alignment. Auburn, Ohio State, and other spread-to-run squads have made hay off the player going everywhichway and crossing teams up by being the focus of one play and a decoy the next. Here’s how the base Bear ended up aligning to a Y-Off look, here with the H-back/Y-receiver lined up behind the right tackle: 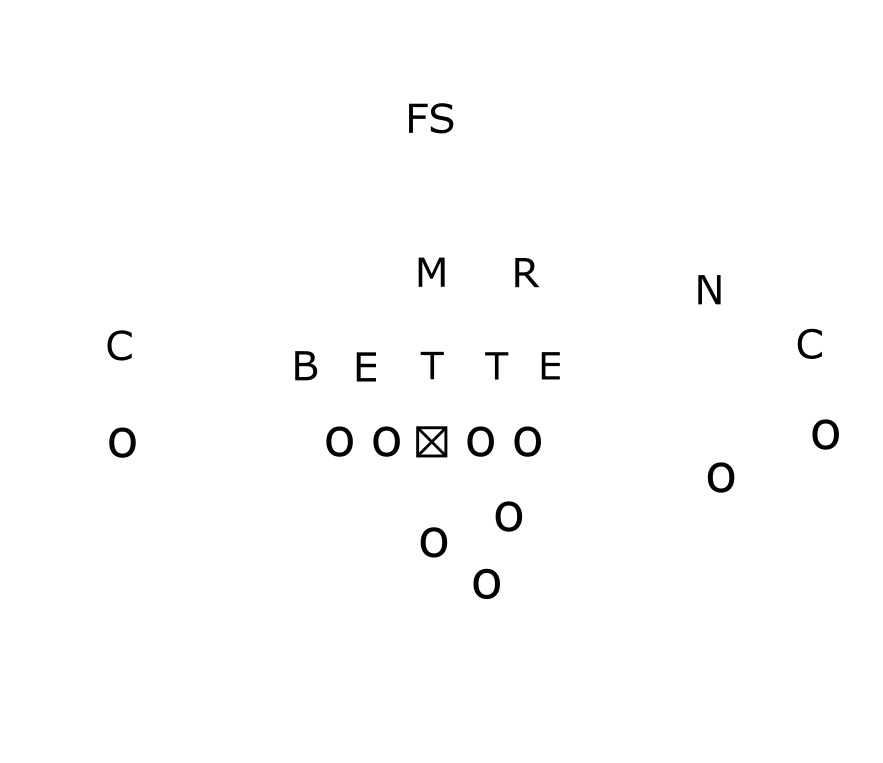 The coverage here is Cover-1/Man-Free, which means the entire defense is playing man-coverage except for the free safety, who zones up the deep middle of the field. This and Cover-0 were the Bear calls of choice vs. Y-Off formations. As we’ll see in the following clips, the free safety was often deep, to the point of being off-screen.