I’ve talked about “Isolation” plays and the Hokies’ “shuffle-Isolation” before, but after watching Dalton Keene wallop some folks with the play for my last article, I’d like to give it a proper look.

Iso plays evolve from “man” or “base” blocking. Man/base blocking is almost as simple as it sounds: find a guy (usually the dude across from you) and keep him away from the ball. At the college level, most teams use plenty of man/base blocking in the passing game, but for a while it mostly disappeared from the running game, excepting maybe draw plays. The Hokies and other spread offenses began to buck this trend by using Isolation (or just “Iso”) plays. On Iso plays, a blocking back becomes a lead-blocker for the runner, creating an extra gap the defense has to deal with.

Or least the Hokies used to buck this trend, as the play has been an increasingly infrequent call. Early on, though, the Iso was a beautiful play for the Fu-fense.

Here’s a sample I-formation Iso play being run through the 2-hole. 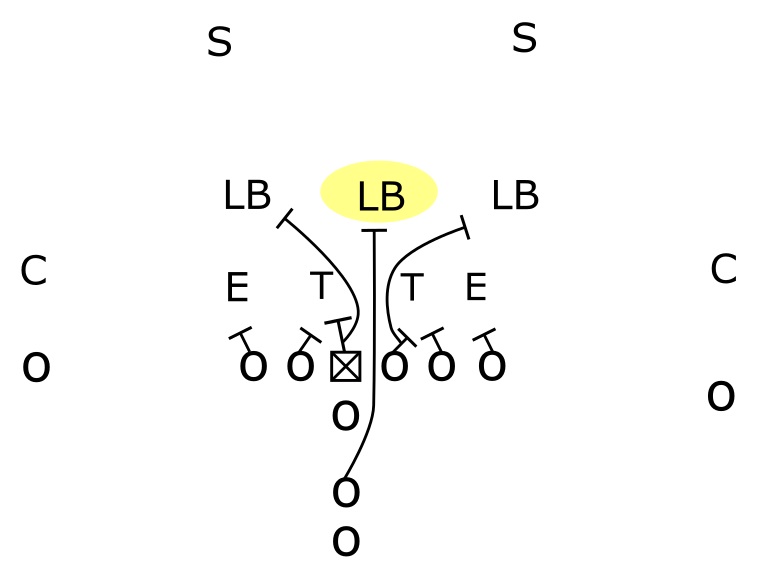 The middle linebacker is highlighted because he’s the “isolated” defender—he’s been left out of the offensive line’s blocking scheme so that the fullback can deal with him. Ideal blocking would wash the defense to either side of the hole, and that’s what the linemen are doing here. The defensive tackles are all getting combo-blocked, where a brief double-team allows the outside blocker to gain control and the inside blocker to climb up and find a linebacker. Here are the Hokies in ’95 attacking Miami’s WLB with an old-school Iso:

In the 4-3 Over (Miami’s favored scheme) the will-linebacker is already somewhat isolated by alignment, and for that reason teams loved attacking the position with the Iso. That clip was where I literally started watching the game, so I imagine it was run a few...