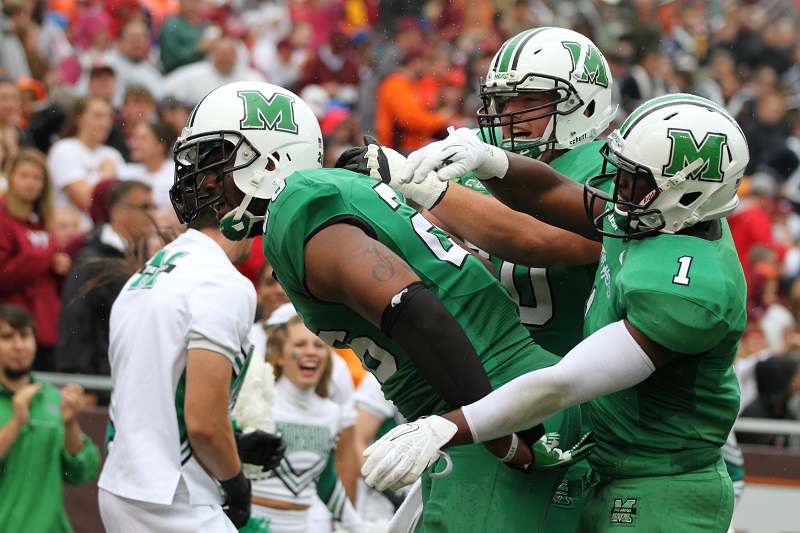 I came in cold on this one, not recalling a single Marshall highlight this season. After a few games, I’m comfortable saying that while not as good as Bob Pruett’s* peak Marshall squads (which had guys like Byron Leftwich, Chad Pennington, Randy Moss, Nate Poole, Rogers Beckett, Jonathan Goddard, and Doug Chapman) this is a capable iteration. Over the course of the season, they’ve probably been a better team than the Hokies. Like seemingly every opponent this year outside of W&M, it’s a more experienced team, and a good chunk could start for Tech, or at least compete for starting roles. This year they gave NC State a fight, swamped ODU, and last week beat a Butch Davis-coached FIU team that was looking for a conference championship spot.

The mesh-option game is a big factor, especially zone read. Toss read also gets called, and I don’t think the Hokies have seen that yet this year (though they’ll remember it from Clemson.) QB Isaiah Green (#17) is young, mobile, and has a wrist-flick deep ball.

ABOVE: Green identifies a lapse in NC State’s rotation.

He had a tough early season with missed reads, fumbles, and picks, then went out hurt for a while, but came back better. Watching the FIU game, one interception might’ve come because the defender he was keying screwed