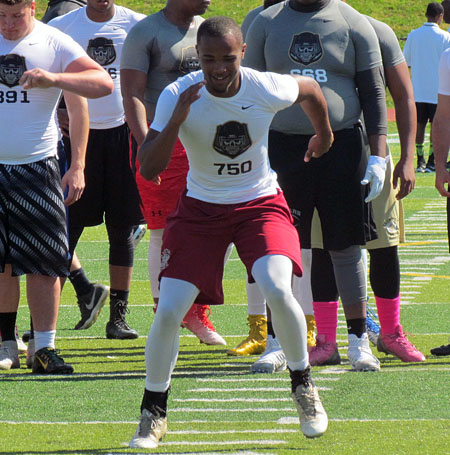 Devante Smith committed to Virginia Tech way back on July 20, 2015.  He stuck with his commitment to Virginia Tech despite the coaching change, and the Hokies stuck with their commitment to Smith as well, even though they pulled the scholarship offers from a couple of his defensive classmates after Justin Fuente was hired.  He’s a tough player to evaluate, but we’ll give it our best shot.

Smith is hard to evaluate because he played quarterback in high school, whereas he’s expected to play one of the safety positions at Virginia Tech.  His highlight film shows no more than 10 defensive plays, which makes it completely impossible to get anywhere close to a feel for his defensive abilities.  This scouting report is going to be nothing more than a shot in the dark.

Good size: HokieSports.com currently lists Smith at 6-feet and 190-pounds.  That’s about the same size Chuck Clark was coming out of high school, which means Smith could potentially play Rover or Free Safety.

Good ball skills: Smith goes up in traffic and catches the ball with his hands like a wide receiver.  That’s always a good trait for a defensive back.

Other than that?  I really can’t see any traits that translate well to the defensive side of the ball.  I’m not saying there aren’t there, I’m sure there are.  But there’s only so much you can tell from fewer than 10 defensive plays.

One thing I do know Smith will have to work on is his speed, and I expect that’s why he didn’t get more Power 5 interest.  He’s a good overall athlete, but his speed is a question mark.  Here are his workout numbers from a regional Nike event…

Smith’s overall numbers are solid.  In fact, he shows a lot of explosive power with that power throw, and his vertical jump and 20-yard shuttle times are solid for a safety (and they’ll only improve in a college strength program).  But his speed is a question.  I have no doubt that he has the football IQ to be good in zone coverage, but can he run with a speedy slot receiver down the field?  We’ll see.

Bottom Line: I like mith, but he’s still a huge unknown at this point.  There simply isn’t enough information available unless you have access to compete game films, which obviously we don’t.  This is a case where you’ll just have to trust Bud Foster.  Smith could potentially play Free Safety or Rover in Virginia Tech’s scheme.  Where he plays could perhaps be decided by where Devon Hunter sticks long-term.

ETA: 2019.  I’ll go conservative in my estimate, simply because there is so little information about Smith.  His film doesn’t provide for a proper chances to evaluate his defensive abilities.  So I’m going with the generic approach and say he’ll be ready to contribute in the two-deep by his third year in the program.