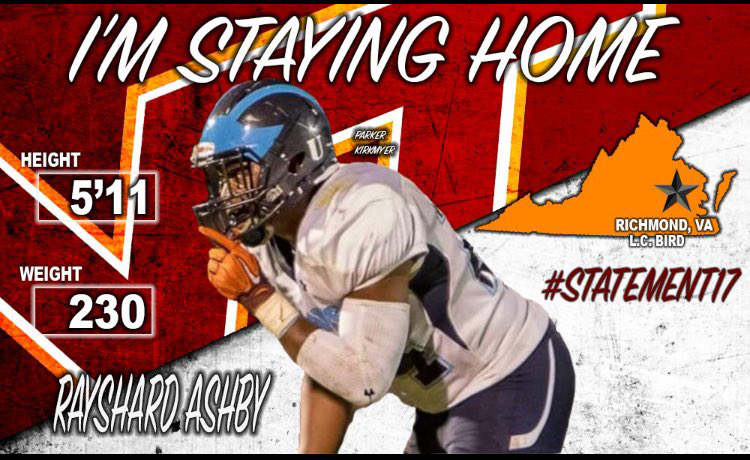 Rayshard Ashby is only listed at 5-11, but what does that matter?  The best Mike linebackers Virginia Tech has ever put on the field have been 6-1 or less.

To be honest, DelRicco’s 6-1 listing might have been a little generous.  It certainly is generous for Jack Tyler, who was about 5-11.  The main point here is that in general Tech’s best Mike linebackers have never had what most scouts would consider “ideal” height.  I’ve always believed that height is the most overrated attribute of an inside linebacker.  Two of the best NFL inside linebackers I’ve seen were Ray Lewis (6-1) and Zach Thomas (5-11).  They weren’t tall by NFL standards.

Now that we’ve got that out of the way, let’s talk a little bit about Ashby.  He was an important recruit out of L.C. Bird High School in Richmond, and he was recruited by Zohn Burden.  He played middle linebacker for Bird, and he was considered one of the best pure football players in the state of Virginia during his junior and senior seasons.  In fact, he was named the 5A State Player of the Year two seasons in a row.  With these stats, it’s not hard to see why…