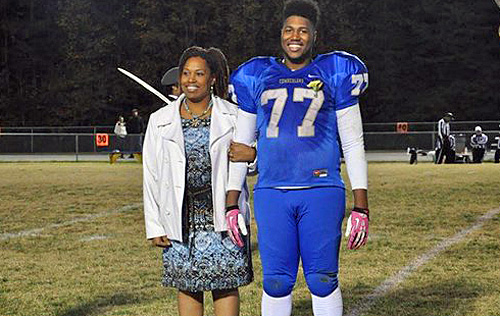 Nobody had heard of T.J. Jackson until he committed to Virginia Tech back on December 15. That’s because of two reasons:

2: Jackson spent his junior season in 2014 at Wesleyan Christian Academy in High Point, N.C. At Wesleyan, he concentrated on basketball rather than football.

Basically, Jackson is a huge guy with a terrific frame, but who never focused on football until his senior year of high school. The lack of football experience is the reason for his lack of scholarship offers, but his potential upside is certainly worth the risk for the Hokies, who needed to add more offensive linemen to the 2016 class. At the time of his commitment, Jackson was the best offensive line prospect available, and he has the potential to turn into a steal.

Size and frame: They don’t come much bigger than TJ Jackson. He probably won’t add too much weight at Virginia Tech, and he doesn’t need to. However, Ben Hilgart and the strength and conditioning staff will change his body structure. By the time he’s done, he’ll resemble one of those aircraft carrier offensive tackles that scouts drool over.

Wide base: As far as I can tell, Jackson’s team doesn’t pass the ball very much. I don’t believe there is one single play in his highlight film of him pass blocking. However, he’s got a wide base, which