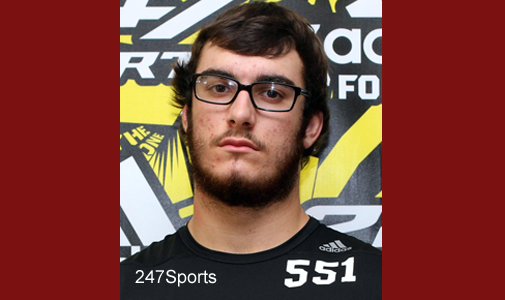 Jarrett Hopple is an offensive tackle prospect who could also end up at offensive guard sometime down the line. He selected the Hokies over scholarship offers from Pitt, UVA, Wake Forest and West Virginia. He is an important recruit from Nansemond River High School in Suffolk.

Hopple committed to the Hokies way back on March 28, 2015. He stuck with his commitment despite Frank Beamer’s retirement, and despite the wholesale changes on the offensive coaching staff. Like most offensive line prospects, there are a lot of unknowns. His film shows a solid, yet unspectacular player. He certainly has the build to be a successful ACC player, but it’s impossible to predict how most offensive linemen are going to develop over the course of 4-5 years.

Here’s a look at his highlights…

Frame and build: Hopple looks like he has the frame and build to weight 310-320 at the college level. His legs look thick, and he has plenty of room to grow in the upper body. I believe he’ll eventually develop into a strong player at the point of attack.

Pad Level: Hopple does a pretty good job with his pad level in pass protection, which in turns helps