Boy, I’m glad I kept my mouth (keyboard) shut after the WVU game.

It’s hard not to react to something like the 88-63 “the score was closer than the game” debacle that took place in Cassell on December 30th, my birthday (some birthday present). The Hokies got stomped on the court, and Buzz Williams nearly blew a blood vessel yelling at his players and frenetically yanking guys up and down off the bench while trying to find a lineup — any lineup — that looked like something other than West Virginia roadkill.

Then Buzz kept his team in the locker room for an hour and 45 minutes after the game, skipping his VT radio obligations in the process and causing the beat writers to have to twiddle their thumbs for almost two hours. That rankled the media, even calm, cool football beat writer Andy Bitter …

Kind of a jerk move by Buzz and the gang. https://t.co/rMxq0BjKse

… and caused a few Tech fans to question his methods, to put it nicely. Not all fans, just some, and yours truly even got into the act. 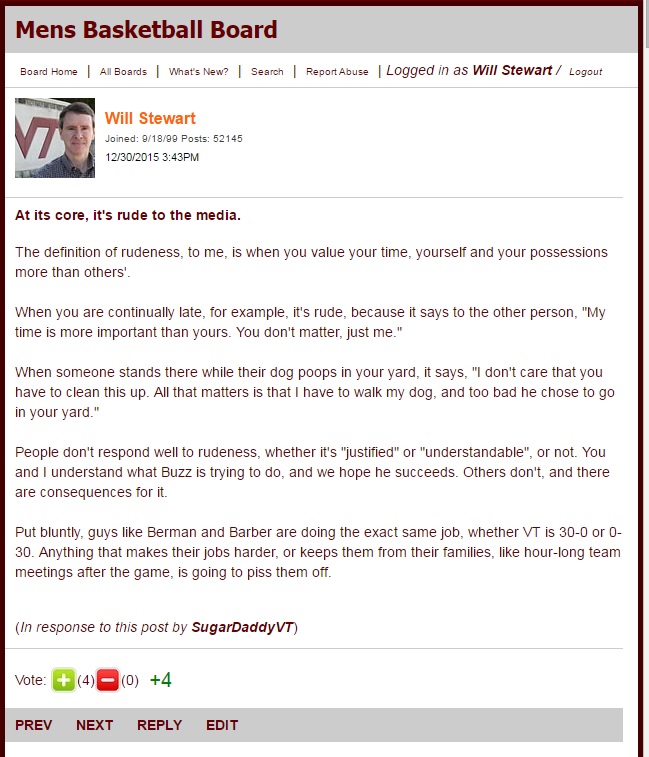 In all, it was a train wreck of a day, and on the heels of Tech’s whipping at the hands of St. Joe’s, it was not a good two-game stretch for Tech basketball.

But I’ve been saying for years now that basketball is a game of runs, both within a game and within a season. Teams will score ten straight during a contest, or they’ll win four straight, and it looks like the fun will never end. On the flipside, they’ll get outscored 18-3 at one point in a game, or they’ll lose three games in a row, and it looks like those lifeless, incompetent bums couldn’t find the rim with both hands and a flashlight.