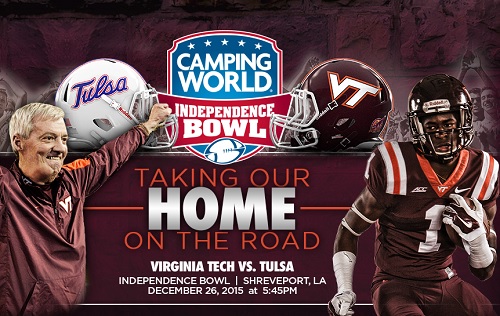 Most people had Virginia Tech penciled into the Belk Bowl in Charlotte. In fact, many fans went so far as to buy tickets and reserve hotels. Many of those same people were in for a surprise yesterday when it was announced that Tech would play Tulsa in the Independence Bowl.

For those of you sending nasty tweets to the Belk Bowl about the situation, stop. It’s not their fault.

Here’s how the Hokies fell into the Independence Bowl…

1: Clemson qualified for the College Football Playoff, and Florida State was good enough to make the Peach Bowl, one of the New Year’s Six Bowls. UNC heads to the Champs Sports Bowl. That left everyone else for the Tier 1 bowls: the Belk, Pinstripe, Sun, and Music City.

2: Nobody wanted Pitt because their fans don’t travel at all. Keep that in mind. This is really the key.

3: Louisville was an obvious choice for the Music City Bowl, thanks to their proximity. The Pinstripe Bowl wanted Duke (for whatever reason). The Sun Bowl was good with Miami, because nobody is going to the Sun Bowl anyway.