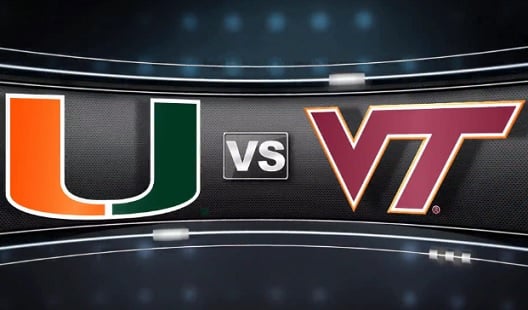 While I’m writing this, my Dad’s getting prepped for a heart ablation, his second round of the treatment in the past few months. That’s not much fun, but worse is that I’m in Hooville at the UVA Medical Center and it seems everyone around here just remembered they had Cavs gear buried in the bottom of their dresser drawers. So, note in advance I’m probably not in the best mood.

If you had told me last week that Tech would not only stop Miami’s zone-run game, but would see its own take off, I would’ve expected a Hokie win. McMillian had a cut-and-go attack we haven’t seen since Trey Edmunds was hitting his stride, and he had a little wiggle to go with it. Meanwhile, the Lunch Pail crew held the Hurricanes to 99 yards rushing. Hokies were splitting double-teams, bursting bubbles, and attacking blockers while still keeping leverage and free arms. In isolation, it was fun to watch, and felt a bit like the old days when these defenses were at their peak.

Unfortunately, the problems had an air of familiarity to them, albeit more recent. The offensive line was hounded in pass protection by Miami’s athletic front, while Tech’s defensive ends were largely stymied, and both squads piled up penalites. Plays and schemes seemed perfect – VT receivers ran open and defensive backs were in position – though ultimately failed at the last instant. This was another game lost on the execution level, so I want to focus on that.

On deep fly routes, Hokie defensive backs are taught to stay tight to their man and to play the receiver’s hands in order to break up the pass. There are a few reasons for doing this: it’s much easier to focus on the receiver’s hands than it is to turn and find the ball, and it’s also harder to get fooled on stop-and-go moves. There are problems with the technique, too, the main ones being that it’s much easier to make contact with a receiver (and therefore get a pass-interference call) on an underthrown ball, and that playing the hands means missing out on potential interceptions. Because Tech’s