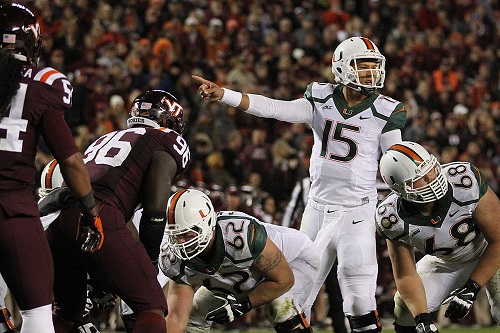 Remember when we used to beat Miami all the time? That has changed in recent seasons, with the Hurricanes taking three of the last four meetings against Virginia Tech. Even when the Hokies might not have been quite as talented as Miami, you could always depend on the Canes to make mental errors, commit key penalties, and in general play undisciplined football. Those mistakes would generally help lead to Tech victories. Not so much anymore.

Miami hasn’t improved in those phases of the game, but the Hokies don’t have the overall talent, depth, or discipline to take advantage. The Canes had nine penalties for 81 yards yesterday, and that’s a lot. However, Tech countered with eight penalties of their own, including the critical one where Luther Maddy lined up offsides in Miami’s last possession before halftime, giving Brad Kaaya a free play. He went deep downfield for a completion to Herb Waters, which set up the go ahead touchdown.  More on that play later.

But penalties are only one part of the game. What really lost the game for the Hokies were their turnovers, as well as the inability to get pressure on Miami quarterback Brad Kaaya.

Hokies Blitz a Lot, but Kaaya Burns Them

You’ve got to hand it to Miami quarterback Brad Kaaya and the Hurricane offensive line. Time and time again Bud Foster