Virginia Tech defeated a Big Ten team on the road 51-24 yesterday, and it could have been by a larger margin.  If that 90 yard fumble return didn’t happen (which was caused by a mental error by true freshman left tackle Yosuah Nijman), take seven points away from Purdue and add at least three to Virginia Tech’s total.  That game was more like a 54-17 or 58-17 game.

Let’s be honest with ourselves.  Purdue is bad.  They are slow defensively, and they only won a combined four games in their previous two seasons.  They don’t look like they are going to be much better than that this year, either.  They just don’t have the talent to compete at the Power 5 level.

That being typed, would we have done that to Purdue last year?  No chance.  We wouldn’t have lost, but we probably would have struggled our way to an ugly win.  This team has improved a lot, even without their starting quarterback and an undersized walkon at middle linebacker.

Even most of Tech’s wins over the last several years have been somewhat ugly, and generally speaking these Sunday articles haven’t been especially fun to write.  This one is different though.  I really enjoyed that game yesterday.  Even though it was close at halftime, a quick look at the total yardage (330 to 127 in favor of VT) gave a pretty clear indicator of what was probably going to happen in the second half.

Don’t get me wrong, there are a lot of things the Hokies need to clean up.  Still, they took a big step in the right direction yesterday, and I think everyone – players and coaches included – is feeling a lot more confident right now.

Time for an Avatar Change

Back in November, the internet went wild with this screencap of Frank Beamer celebrating a missed field goal during the Wake Forest game. 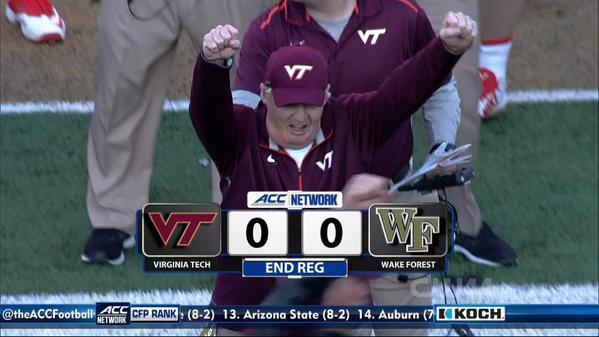