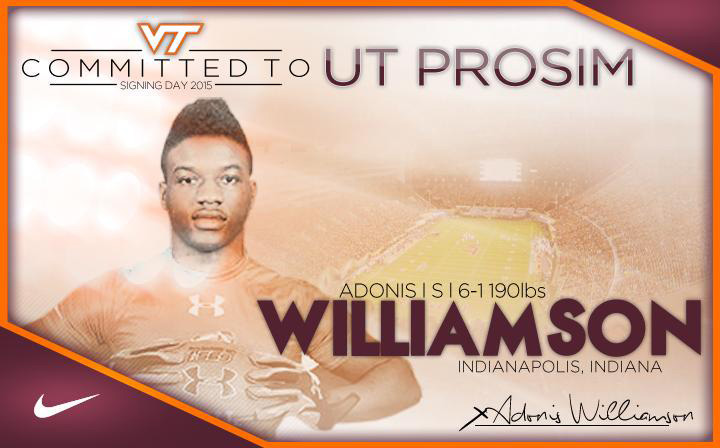 Today’s we’ll profile Indiana native Adonis Williamson, who is one of Virginia Tech’s most underrated recruits of the 2015 class.

I believe Williamson is a very good prospect, though I don’t quite see him as a cornerback. Here’s his highlight film…

To me, Williamson has safety written all over him. Specifically I see him at free safety, with a guy like Adonis Alexander playing rover. (That would be pretty cool…to have a pair of Adonii manning both safety spots.). He has a lot of traits to like…

Physical style: Williamson isn’t afraid of contact. Actually, he seems to relish it.

Instincts: The film shows a player that reacts very early to offensive plays. Williamson displays a good knowledge of where the play is going.

Tackling angles: Williamson must have a protractor in his head, because he has a knack for taking great angles to the ball carrier. He’s not the fastest guy in the world (more on that later), so this is a very important part of his game.

Tackling ability: I’d like to see him wrap up a little more, but Williams doesn’t drag guys down. He keeps his feet chopping and he runs through them.

Size and strength: Williamson has the size and strength to play either safety spot, and if he does end up at corner, he would be able match up with bigger receivers from a