The original plan was to include the two transfers in today’s scouting report, however today’s article started running a little long. Instead, I’ll talk about those guys tomorrow, as well as how all the returning players mesh together. 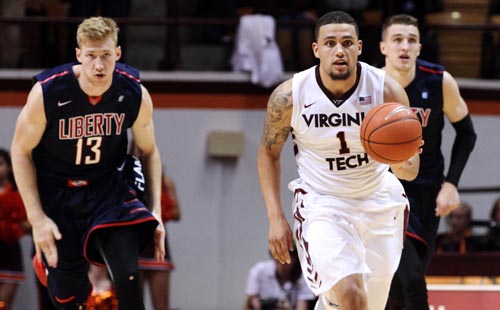 If you gave out superlatives for the 2014-15 Hokies, Mueller would have tied Will Johnston and Christian Beyer for “Most Likely to Box Out.” Those three guys showed a greater willingness to put a body on a body than anyone else on the team.

I don’t think Mueller is as physically gifted as Tech’s other wings, but he certainly has some things going for him…

1: He can knock down open outside jumpers.
2: He shows a willingness to be unselfish and put his body on the line.
3: He is physically tough.
4: He has more playing strength than anyone else on the team, including Tech’s “bigs.”

Mueller also finishes well on the inside when he gets to the basket, and that’s always an admirable quality. And who can forget that Georgia Tech game when he drew three charges? That was just the second time in Buzz’s seven years as a coach that he’s had one player draw three charges in one game. That says a lot about Mueller’s toughness and his willingness to put his body on the line. That, and the fact that he was willing to play all five positions this past season make me a big Malik Mueller fan.