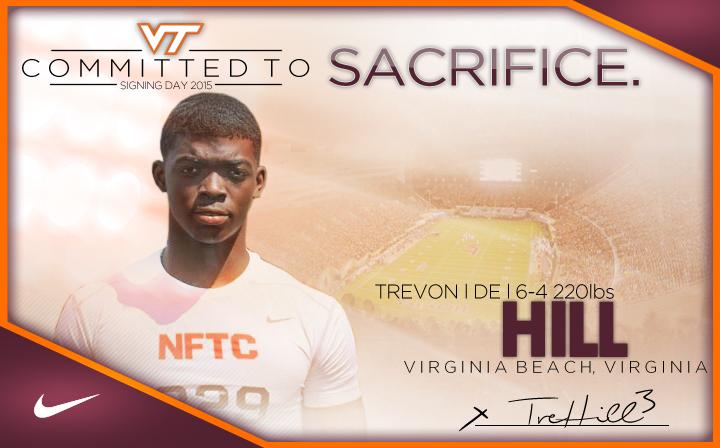 Except for Dwayne Lawson, you could argue that Trevon Hill was the most important signee of the 2015 recruiting class. He fills a major position of need, and he’s one of the top recruits in the much-discussed 757 region.

Hill committed to the Hokies over a solid offer list that included Clemson, UNC, Louisville, Kentucky, Nebraska, NC State, West Virginia and Wisconsin. I believe his offer list, and his corresponding national ranking, would have been a little bit more impressive if he had been slightly bigger last summer. Nevertheless, apparently he weighed in at 233 earlier this week, which is a big deal, as we’ll discuss later.

Personally, I think Hill was on the way to blowing up as a senior and greatly improving his ranking, but his mid-season expulsion from Salem High School prevented that from happening. Still, he’s an excellent prospect. Take a look at his highlight film…

Hill is one of my favorite recruits of the class, and it’s easy to see why when you watch those highlights.

Hill has many strengths

Playing strength: For a guy who never played over 220 while he was in high school, Trevon Hill has exceptional playing strength. That might not translate to the college level at his current size, but it will as he gets some time in Mike Gentry’s weight room. He’s one of those guys like Dadi Nicolas who plays stronger than he looks. Charley Wiles would probably describe Hill as having