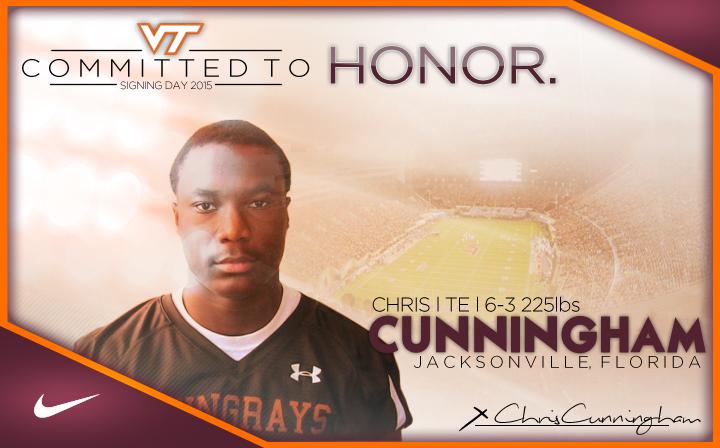 At this point, we know that Scot Loeffler favors an offense that uses multiple tight ends.  He preferably wants multiple different types of tight ends, so that he can use them all in various ways.

For example, Bucky Hodges is listed as a tight end, but almost all of his receptions came while he was split out as a wide receiver in 2014.  Ryan Malleck is a guy who can split out, but is better in the role of a traditional tight end.  Kalvin Cline is something in between Hodges in and Malleck.

I don’t view Chris Cunningham as the next Ryan Malleck, Bucky Hodges or Kalvin Cline.  I think he’s much more comparable to DJ Coles at the college level.  He has the same body build, he can split out wide as a receiver, and he can put his hand on the ground if needed, but he’s much more suited to the H-back role than anything else.

Let’s take a look at his film.  Note that he plays offense and defense.  He could potentially play H-back or defensive end in college, and I believe he could have a future at either spot.  However, VT recruited him for offense, and I can’t say I disagree with that at all.  The Hokies have lacked offensive talent for so long that they are trying to pack as many playmakers on that side of the ball as possible, and that’s the right move.

The H-back role suits him in two different ways.  First, it gets him out in space a bit more, and he can be used in motion, playaction, etc.  Second, it gets...