Offensive tackle Mike Arnold is our next subject in our scouting report series.  As always, let’s start with the preamble.

I’m by no means a professional scout, so these reports are going to be far from perfect. They are just my honest take on each player, his talent level, where he fits in the program, etc. I think I’m better at evaluating certain positions than others. For example, I think I’m much better at evaluating wide receivers, defensive backs and defensive linemen than offensive linemen, so take it all with a grain of salt.

For those of you who keep up with MLB’s Top Prospects, I’ve also included an ETA feature that shows when I think each prospect has a chance to contribute either offensively or defensively (not special teams). Things that factor into a player’s ETA include talent level, size, strength, and depth at his position. For example, a defensive end’s ETA might be 2015 or 2016 simply because the Hokies lack depth at that position, whereas a defensive back’s ETA might be 2017 because Tech already has so many bodies in the secondary.

Note that all heights and weights are taken from HokieSports.com. 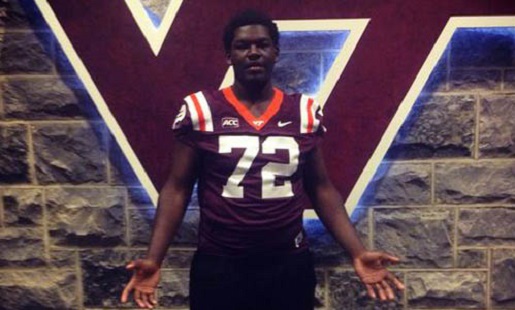 When Stacy Searels was hired as Virginia Tech’s offensive line coach, he immediately went to work on finding big linemen who fit his style of play.  One of the first offers he extended was to Winter Haven’s Mike Arnold.  Searels wasn’t the only major coach to offer Arnold, joining Notre Dame, Nebraska, Miami, NC State, Kentucky, Arizona and others.  He was also offered by Les Miles, Jeff Grimes and LSU just a few days before Signing