I’m by no means a professional scout, so these reports are going to be far from perfect. They are just my honest take on each player, his talent level, where he fits in the program, etc. I think I’m better at evaluating certain positions than others. For example, I think I’m much better at evaluating wide receivers, defensive backs and defensive linemen than offensive linemen, so take it all with a grain of salt.

For those of you who keep up with MLB’s Top Prospects, I’ve also included an ETA feature that shows when I think each prospect has a chance to contribute either offensively or defensively (not special teams). Things that factor into a player’s ETA include talent level, size, strength, and depth at his position. For example, a defensive end’s ETA might be 2015 or 2016 simply because the Hokies lack depth at that position, whereas a defensive back’s ETA might be 2017 because Tech already has so many bodies in the secondary.

Note that all heights and weights are taken from HokieSports.com 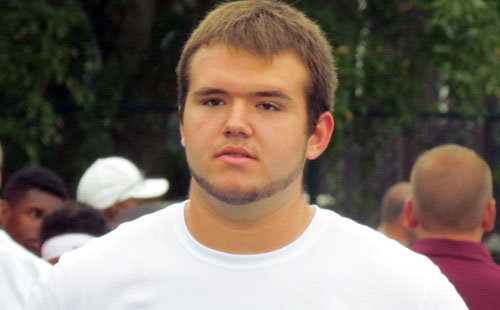 While Austin Clark isn’t quite the highest-rated recruit of the 2015 class, you can make the argument that he’s the most important.  He originally committed to South Carolina, but had a change of heart and decided to stay close to home.  Good thing he did, as the Hokies desperately needed multiple offensive linemen in this recruiting class.

Not to mention that