Virginia Tech’s 2015 football schedule was released this morning, and there are a number of things to talk about.

Success in sports comes from four things: talent, coaching, the schedule, and injuries.  Virginia Tech’s schedule sets them up to contend for the ACC Coastal Division this season.  We’ll also take a look at Friday night games, and compare their TV numbers to Tech’s Thursday night games from 2014. 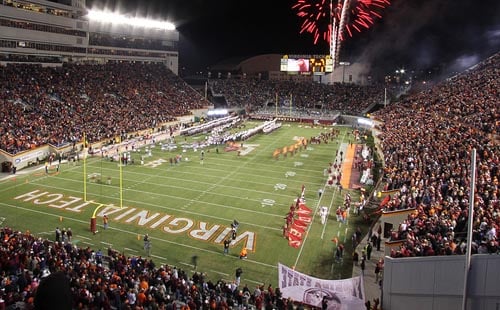 Virginia Tech is not hosting a Thursday night game in 2015, and the reason is simple. Whit Babcock released this statement this morning:

“The ACC and ESPN are aware of our desire to continue to play a Thursday night game in Lane Stadium annually, if possible,” Tech Director of Athletics Whit Babcock said. “The Thursday night options available to the ACC, in reality, were only weeks 5, 8, and 12, but with our slate of opponents for those weeks (Pitt, Duke, and North Carolina, respectively), at least one of the teams in each game would have had extra rest, which is not allowed by ACC scheduling parameters. We want to have the best opportunity to win and, in the case of week 5, it was important to us that we host a Saturday game on full rest following two consecutive road non-conference games. I am hopeful, though, that we will return to the Thursday night game rotation in 2016.”

It’s a simple issue of bye weeks and rest, and the ACC just didn’t make it work this year. I don’t think it’s as important to the ACC as it has been in the past, simply based on TV numbers of Thursday