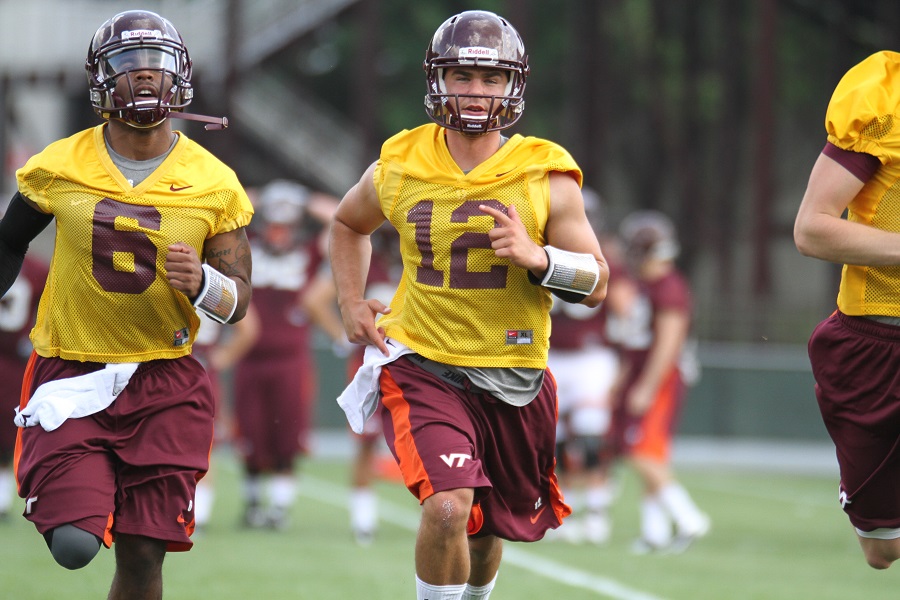 The quarterback battle is still “brewing.”  Gosh, I crack myself up.  Virginia Tech was originally supposed to hold a mini-scrimmage this afternoon, and it seemed as if a decision on the quarterback situation would be made soon after, but that scrimmage will no longer take place.  Instead, Tech will hold a full (closed) scrimmage on Friday, so we’re all still waiting for that decision.

My guess is that the coaches will take the weekend to watch the tape of Friday’s scrimmage and talk about the situation in staff meetings.  After that, Frank Beamer will announce Tech’s starting quarterback during the press conference on Monday.  That’s simply a guess on my part.  With limited access this year, and closed scrimmages, it’s difficult to say what’s going on behind the scene.

The coaches originally said they wanted to make a decision early, but they did not.  That could be for any of several reasons…

1: Both quarterbacks are really, really good, and thus the coaches are having trouble deciding which one to start.  Unlikely.

2: Both quarterbacks are really, really bad, and thus the coaches are having trouble deciding who to start.  Unlikely.

3: Both quarterbacks have played well at times, and had their bad moments at times.  Likely.

One thing I’ve heard from a couple of different people is that Michael Brewer got out to a hot start, but has cooled a bit of late, and that has caused the competition to last longer than they originally thought it would.

That said, I would still be surprised if Michael Brewer isn’t the starter against William & Mary.  I think he has a higher ceiling than Mark Leal,