Each year, the same question is asked. How much will Bud Foster choose to use the whip linebacker this season? That’s a difficult question to answer.

James Anderson and Cody Grimm were terrific whips for Virginia Tech, and in fact Anderson is still in the NFL as a traditional linebacker. Grimm was an NFL safety. That begs the question: what is a better fit at whip, a linebacker type or a safety type? I suppose it depends on who the Hokies are playing, the formations they like to use, and the personnel.

Bud Foster has already said that his nickel will be Chuck Clark (6-0, 208, So.) this season. If the past four years are any indication, we will see Clark on the field more than Tech’s whip linebackers. At 6-0, 208, Clark has the size to hold up in the run game, but we could see Ronny Vandyke or Josh Trimble on the field against power formations. 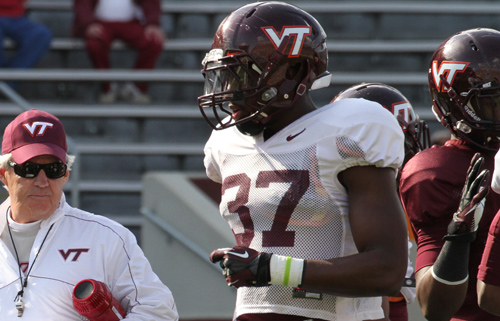 At this point, we don’t know a lot about Ronny Vandyke. He played 152 defensive snaps back in 2012, but was lost for the 2013 season to a shoulder injury. He remained out for the spring of 2014, and though he was healthy at the beginning of fall camp, he has since suffered a groin injury. We don’t know the extent of the injury, or how much time he’ll miss.

The Tech coaches were very high on Vandyke coming out of high school, but those injuries have set him back. They have harmed his development, cost him strength, and limited the coaching staff’s ability to get a good scouting report.

Vandyke is Tech’s most fluid whip linebacker, which means he would be more likely to stay in the game against a spread formation than fellow whips Josh Trimble and Derek DiNardo. However, he’s got to be rusty, since he hasn’t played much football since the spring