1: Which ACC away game will be the biggest challenge and why?

Chris Coleman: There are three options – at UNC, at Pitt and at Duke. You can make a strong argument for each game.

UNC: The Tar Heels probably have the most balanced roster in terms of talent of those three teams. Marquise Williams has the chance to be a very good quarterback.

Duke: The Blue Devils beat the Hokies in Blacksburg last season, and they are the defending Coastal Division Champs.

In the end, I’m going with UNC. We don’t know Pitt’s quarterback situation, and the Panthers lack athleticism on the defensive side of the ball. Duke lost linebacker Kelby Brown for the season, which is huge for that defense. Plus, I don’t think the Blue Devils will be as clutch this year as they were a year ago.

Tech could win any of those three games, or they could lose all three. In order, I’m worried the most about UNC, then Pitt, and finally Duke. I should probably respect the Blue Devils more, and I do think they will go to a bowl, but they really had lightning strike at some opportune times a year ago, and that’s not likely to happen again. 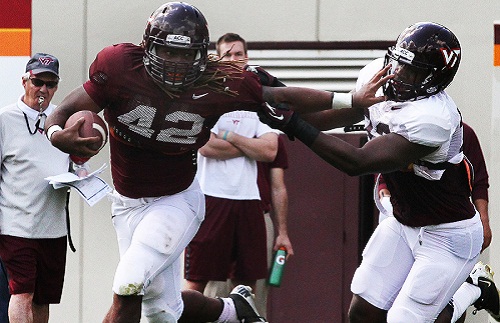