Monday’s media predictions broke a string of nine straight years of the Hokies being picked to finish #1 or #2 in the Coastal Division.

When the votes were tallied in Greensboro, a jumble of voting on Duke, Virginia Tech, Miami and UNC in the Costal Division had resolved itself into a #3 prediction for the Hokies. And that was by a narrow margin, as the 571 points amassed by the Hokies barely nudged them ahead of UNC’s 570 points. 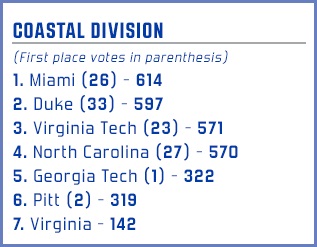 The closeness of the point totals, and the distribution of the first place votes — which don’t line up with the point totals — tells you what a grab-bag the ACC media consider the Coastal to be.

It’s wide open. Miami came out on top in points, but the voters basically didn’t pick anyone, with any certainty.

A Look at Tech’s Prediction History

But beyond that, Virginia Tech’s third-place prediction, and the fact that the Hokies were fourth in first-place votes received, tells you where the perception of the program is right now.

Since the ACC went to divisional play in 2005, Virginia Tech has never been picked lower than #1 or #2 in the Coastal,