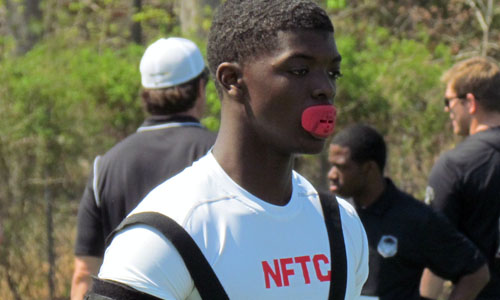 Recruiting had been going pretty slow for the Hokies this summer, and those Tech fans who follow it closely needed to hear some good news for their own personal sanity. Trevon Hill‘s commitment to the Hokies on Saturday was just what the doctor ordered.

As you know, defensive end is a huge need in the 2015 class. It became an even bigger need when the Hokies struck out on every single one of their defensive end recruits in 2014 (Kevin Bronson would have been a DT at Tech…more on him later). Here’s a look at the defensive ends who are currently in the program:

That’s only four scholarship defensive ends in the program right now, with zero true freshman defensive ends to redshirt or consider for playing time, unless Vinny Mihota magically gets faster without putting on weight in a college weight program (unlikely).

That makes it imperative that Virginia Tech focus on defensive ends in this year’s class by signing two at a minimum. In the end, I think they’ll probably try to take four defensive ends in 2015. Not only do they need quantity, but they need quality as well. If guys like Dewayne Alford and Seth Dooley don’t pan out, they will need at least one true freshman end who is ready to play immediately in 2015.

Things didn’t start off well for Virginia Tech when it comes to defensive end recruiting. Michael Barnett decommitted and has since picked FSU, though unlike others I’m not convinced he would have been a good defensive end for the Hokies. Seeing him in person last summer, I thought he had the frame of an offensive tackle. We’ll see where his body decides to take him in the future. Darius Fullwood committed to Kentucky over the Hokies, which