Today we’re coming at you with the fifth and sixth rounds of VT hoops fantasy draft.  That extra sixth round is going to be made up of players who never finished their career at Virginia Tech.

To recap, here are the teams thus far…

And now, for the fifth round…

Fifth Round, Pick One – Justin Clark

The last piece of the puzzle is a taller post-player, no doubt needed since I selected 6’5” Bill Matthews in the 3rd round, so Robinson is an excellent choice here.  Robinson was the captain of Virginia Tech’s Metro Conference Championship team in 1979 and was featured as an ACC basketball legend in 2011, oddly enough.  Robinson was a lanky 6’9” player, but he led the team in rebounds in each of his final three seasons on campus.

For my pick in this round I take Bob Ayersman, and not just because a family member basically sent me a death threat when I didn’t have him in my VT all-time top 10 a few years ago.  I need a small forward, and at 6’4″, he’s a small forward (he did play forward at VT in the late ’50s).  Bob averaged better than 20.5 ppg for his VT career, 4th all time behind Allan Bristow (23.1), Bimbo Coles (21.6) and Wally Lancaster (20.7) He still holds the freshman and sophomore single season scoring average records, and his 26.5 ppg as a sophomore is 2nd best ever for a season at VT.  Bob was All Southern Conference three times at Tech — Freshman of the Year and 2nd Team, and 1st Team the next two seasons.  He still ranks 9th on the VT all-time scoring list with 1782 points despite the fact he played much fewer games than the guys of the last 55 years (just 88 total games in 4 years). 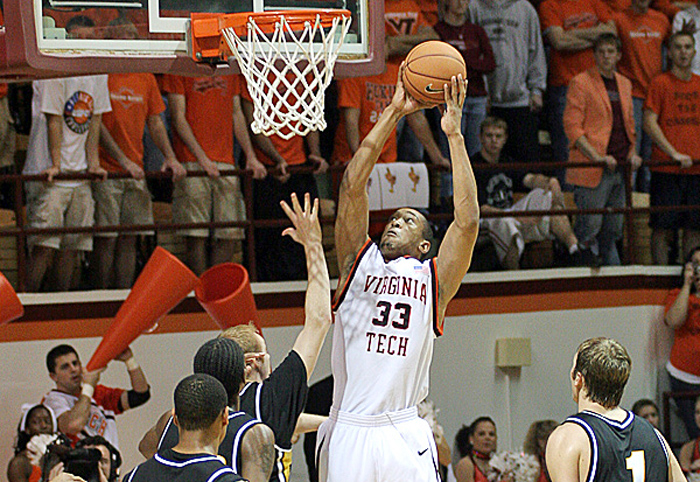