This is the second installment of a lengthy, three-hour interview with Kevin Jones, Virginia Tech’s second all-time leading rusher. Click here for Part 1.

KJ recently graduated from Virginia Tech with a degree in Industrial Design. He also served last fall and winter on the athletic director search committee that recommended three candidates to replace Jim Weaver. One of those candidates was, of course, Whit Babcock.

In case you missed it, it was announced earlier this week that Kevin Jones has been hired by Whit Babcock to serve as Special Assistant to the Athletic Director. 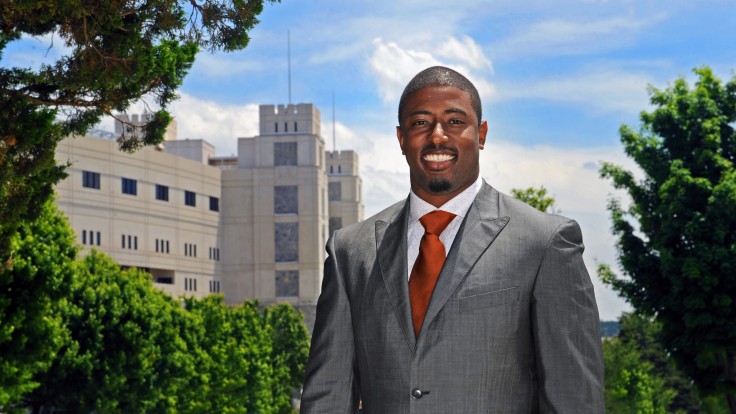 From the press release linked above:

His duties will include representing the Director of Athletics and Virginia Tech Athletics at a variety of campus and off-campus functions and meetings, serving as a role model and mentor for Tech’s current student-athletes in all sports and developing and growing successful relationships with former student-athletes, with a particular emphasis on those competing professionally.

The job will also entail assisting in the recruiting process for many sports in accordance with NCAA rules, along with successful interaction and relationship building with campus administrators and local and regional business leaders and donors. Additional aspects will include outreach efforts and fundraising.

TSL congratulates Kevin on this exciting new chapter in his life, and we appreciate him taking the time for this interview. This part focuses on game memories from 2001-2003.

As you got into college and got heavier, did you start to slow down at all? Do you think you lost some of your speed?

Yeah, but it was moreso me not training like a track athlete anymore. Like DeAngelo, he went to the track team and was training with them and stuff like that, and was actually running at a meet. And I did it, I ran in one meet at Carolina and I think I came in third. And honestly, I didn’t want to run track anymore. I want to say at that time, it was just work to run track and play college football. It was about to be too much, and have grades…the right grades. Passionately, I wasn’t into it like that. In high school, it was fun travelling and running with AAU teams, and being with the guys. I enjoy the guys as much as I do the sport when I’m playing on a team. But I wasn’t passionate about track. I liked doing it, and I was doing it because it made me really fast for football, and it gave me an edge. As long as it was doing that, I was down for it. But when I got here and I was still being successful, I was like “nah.” But it was probably the wrong move, just for the record, not to run track.

So in 2001, Lee Suggs goes down in the first game, and Keith Burnell gets named the starter. You were getting 10 to 18 carries a game, so it’s not like you weren’t playing.

You know what, I felt like I should have been playing [more]. But this was my freshman year, I still had that young attitude about myself, like “All right, well, when I get my carries I’m going to show off…well, not show off, but I’m going to show up, and I’ll be starting when it happens.” If I recall though, my dad was kind of upset. He would ask me “well what’s going on at practice.” I was just like “they just aren’t putting me in there. I’m earning it. I’m doing what I’m supposed to do.”

Keith just wasn’t as physically gifted as you were, but that was Billy Hite for you. Billy’s philosophy from what I can tell from watching him over the years, if you were a young guy you had to earn it. He wasn’t going to push aside older guys.

I don’t know if you know the story about me falling asleep in the meeting.

Maybe that had something to do with it.

(laughs) Right after Lee got hurt. He was like “what the bleep bleep bleep, the