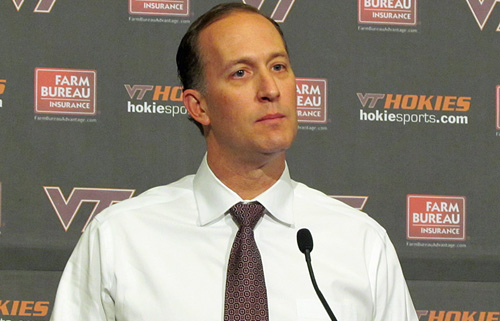 Whit Babcock hopes to have the athletic department streamlined and restructured by sometime in the month of August.  We already know he hasn’t retained Associate AD’s Jon Jaudon and Tim East, and that he is bringing in Desiree Reed-Francois as his Executive Associate Director of Athletics.

In addition, he has created two new recruiting positions for football, and this week two other big changes/additions were announced.

Hokies going SEC in the hire of Chuck Cantor

Per this tweet from CoachingSearch.com, Charlie “Chuck” Cantor is Virginia Tech’s new Director of Player Personnel for football.

Per source, Charlie Cantor set to join the #VATech staff as director of player personnel. Details on the ticker. http://t.co/l4pN48ynfP

Cantor was previously the Coordinator of External Affairs at Temple, and he also served as Georgia’s Assistant Recruiting Coordinator from 2008-11.  He has worked as a recruiting assistant at Rutgers, an offensive GA at Middle Tennessee State, and he also coached at Bobby Bowden’s football camps while a student manager at Florida State.

It’s easy to see the connection here.  Cantor and Stacey Searels worked together at the University of Georgia.  What did Cantor’s job duties include at Georgia?  From