I first approached Kevin Jones about doing an in-depth interview during our spring game tailgate back on April 26th. I described to him how we like to do long-form, far-ranging interviews that give our readers an in-depth look at our subjects, and which give them a chance to reflect, set the record straight on things, and present an accurate picture of themselves.

A “looking back” interview with KJ has been a goal of mine for a while. One of our best, earliest pieces of pay material was an in-depth interview I did with KJ’s dad, Thomas Jones (“Football Coach 2” was his handle on the message boards back in the day), back in 2001 about KJ’s recruitment. If you’ve never read it, set aside a block of time and check it out. 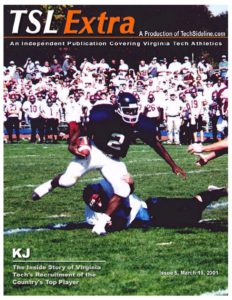 That was back when we had our monthly e-magazine, “The TSL Extra.” That format was a tough sell, and through the first four issues, we only had a couple hundred subscribers. The Thomas Jones interview appeared in issue #5, and our subscriber count skyrocketed well over 500 almost overnight, so I’ve never forgotten that interview, or that moment in TSL’s evolution.

I reminded KJ of that interview. 20 pages of it was with his dad, and was fascinating stuff. I told KJ that one page of it was with him, saying boring things like, “Uh-huh. Yes. Right.” He laughed and said, “I’m not like that anymore.”

He seemed like he was interested, so we exchanged cell numbers. I told him I would get in touch with him after his graduation on May 16th, and we went our separate ways.

Getting these interviews nailed down is a tricky thing, so I knew it may or may not happen. My biggest worry is that KJ would find a job in Industrial Design (his brand-spanking-new degree) and jet off to parts unknown, never to be seen again.

On Monday, May 19th, three weeks after talking to KJ and the Monday after his graduation, I got a text message at 8:18 in the morning: “Will, are we still on for the interview? – Kevin Jones.”

That was my first indication that Kevin Jones is different. I don’t think I’ve ever had an interview subject be the one to initiate the interview and take such an active part in making sure it got done.

My next inclination that he’s different came during a lunch meeting (KJ insisted on paying for the meal, also a first for an interview subject) and two interview sessions that lasted over three hours. Bimbo did one and a half hours. Sean Glennon did one and a half hours. Charlie Moir, Dave Braine … all less than two hours. KJ and I talked for three hours, and we left out entire subjects, including almost all of his NFL career.

An interview with Kevin Jones isn’t just an interview. It’s also a conversation about life, and as an interviewer, you have to work hard to keep things on point, or you’ll wind up just chatting with him about things.

I also wanted to make the point that while it’s an interesting talk, an interview with KJ isn’t as wide-open as some of my past interviews. Guys like Charlie Moir, Dave Braine, Bimbo Coles and Sean Glennon and others don’t have any skin in the game, so to speak. Their careers are long in the past, and they’re not around Blacksburg anymore. Nor are most of their contemporaries, so they can speak freely.

It’s different with KJ. He is still in Blacksburg, and is still threaded deep in the Virginia Tech Athletics Department and the football program. Several times during our two meetings, he took a moment to talk to people and say hello: an assistant basketball coach, a classmate, etc.

This part one is about an hour of the three-hour interview. Once they’re transcribed, it becomes clear how to present them, and in this case, as with the Charlie Moir interview, we’ll present it as a straight Q&A. Enjoy.