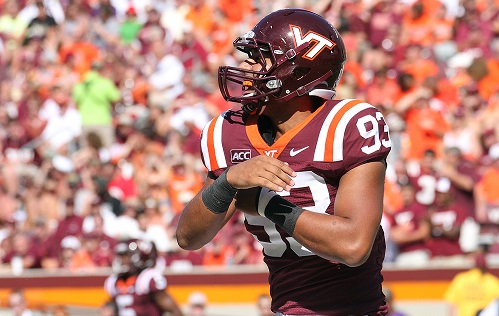 1: TV announcers were always quick last season to point out Cline’s limited high school football experience and how he had been thrust into a starting role. Looking at our depth chart this season at TE, Malleck will be No. 1, Bucky will be used in a number of ways, and Redman has a defined role as an in-line blocking TE (i.e. he’ll get some snaps). Presuming Malleck is fully healthy, does it make sense to redshirt Cline this season?

Chris Coleman: That’s a very good question, and for many positions I might answer “yes.”  However, I’m going to say “no” this time around, for a few reasons.

1) At this point in his career, I’m not sure Frank Beamer is interested in playing for the long-term.  He wants to win now.  At least that’s what I would want to do if I were in his shoes.  Redshirting guys like Kalvin Cline doesn’t help you win now.

2) Darius Redman doesn’t bring as much to the table as Cline.  Remember, he is entering his r-junior season, and he has never caught a pass in a game.  He simply isn’t a receiving threat, in my opinion.  Defensive coordinators don’t have to gameplan for him.  Can he be an effective in-line blocker?  Sure.  But I think redshirting Cline limits what the offense can do with formations and playcalling out of certain formations.  We all want the offense to get better ASAP right?  I think it gets better faster with Cline part of the gameplan.

3) What if there is an injury to Bucky Hodges or Ryan Malleck halfway through the season?  At that point it would be unfair to Cline to pull his redshirt.  And with only Hodges or Malleck left to combine with Darius Redman,