Sponsored by Fisher Law Firm: Virginia’s Virginia’s DUI and Traffic Defense Firm! We serve the Christiansburg, Fairfax, Richmond areas as well as the rest of Virginia. For a free consultation call us any time, day or evening at 800.680.7031 or email us at [email protected] 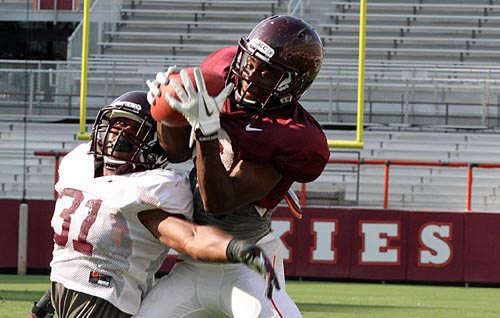 1) Kevin Asante recently returned as a scholarship player.  Where did that scholarship come from? How do you expect VT to get under the 85 limit by the fall?

Chris Coleman: The #1 rule of the 85 man scholarship limit that fans should always follow is to not worry about the numbers.  I wrote an article before spring practice began called Brace Yourselves: Attrition is Coming.  It detailed Tech’s unusually large 2014 class and showed that technically the Hokies would be well over the scholarship limit, and that we could expect a ton of attrition in the offseason.

If you go back through that article, you’ll see that some of that attrition has already happened, as expected.  For example, E.L. Smiling and Matt Arkema are gone.  Defensive end Matt Roth had to give up football, as rumored.  We can expected more attrition over the summer.  Each year on the first day of practice, the new roster is released and we find out exactly who isn’t returning.  We usually don’t know until that first day, but don’t