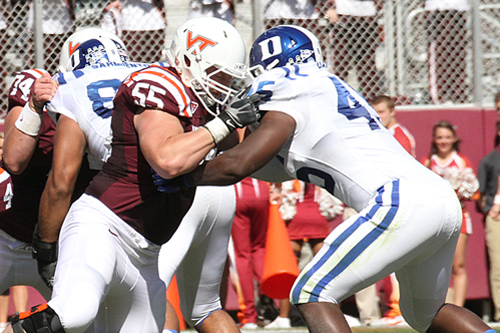 A report was released over the weekend that offensive lineman Brent Benedict was hospitalized in Greenville, South Carolina with blood clots in his leg that have also spread to his heart and lungs.  The initial report said that Benedict would miss the 2014 season.

Virginia Tech football released a quick report on Twitter that Benedict was resting comfortably at his parent’s home.  They also noted the following:

UPDATE P2: Benedict had a L ankle injury in the spring and developed deep venous thrombosis after spring ball concluded.

UPDATE P3: It is too early in the process to make a determination on his football status and we will release an update in weeks to come.

In case you were wondering, deep venous thrombosis is a blood clot that forms in a vein deep inside a part of the body. It mainly affects the large veins in the lower leg and thigh.

So, here’s what we know: Benedict did develop blood clots in his lower leg as a result of that ankle injury.  But that’s all we know.  We don’t know how serious the condition is, and we don’t know if the injury will require him to miss the 2014 season.  Though Benedict was “banged