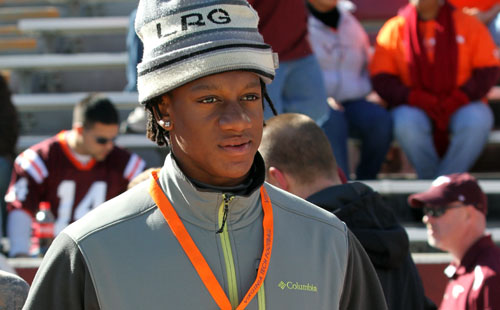 So much of football recruiting comes down to projection.  Coaches are recruiting 16 and 17 year olds, and projecting how big, fast or strong they will be when they are 20-22 is an inexact science at best.  A guy like Tremaine Edmunds requires even more projection.

Like his two older brothers, Edmunds skipped a grade in school somewhere along the way.  He is currently a junior at Dan River, but he is still only 15 years old (he turns 16 this weekend).  Recruiting sites list him at 6-3, 200, and an outside linebacker prospect.  Chris Horne recently interviewed Tremaine, and lists him at 6-4, 215.  I got to see him in person at the Spring Game this past weekend at halftime in the concourse, and Chris Horne’s numbers are more accurate than the numbers listed on other sites.

Tremaine’s father Ferrell was listed at 6-6, 254 as an NFL tight end, and Tremaine is a lot closer to his dad’s build than that of his younger brothers.  Tremaine is listed as an outside linebacker right now, but considering he’s already 6-4, 215 and he’s not quite 16, I think the only system that he projects as an OLB in would be a 3-4.  He’s got a ton of growth left in him, and he has a big frame.

In short, there’s very little chance that Edmunds will be a linebacker for Virginia Tech, if he chooses to sign with the Hokies.  Defensive end seems much more likely, and perhaps tight end is even more