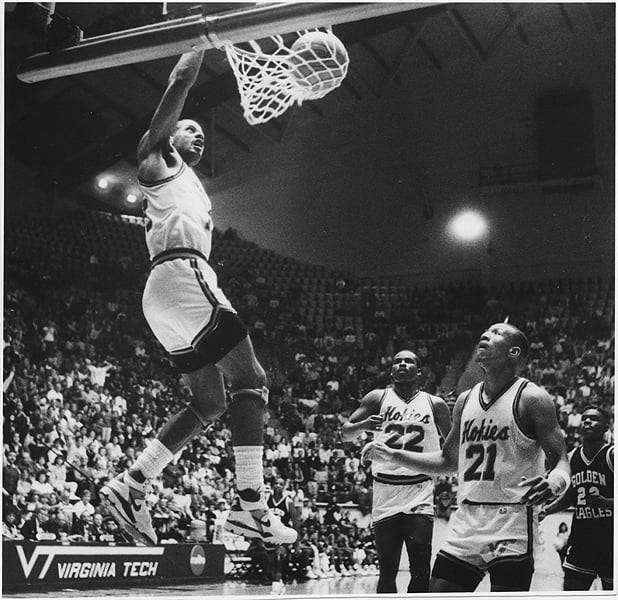 When Bimbo Coles and the Hokies started the 1988-89 season — Bimbo’s junior year — they were full of promise. They were coming off a surprising 19-10 season. Bimbo had led the Metro Conference in scoring the previous season and had been named the Metro’s co-player of the year, along with Louisville’s Pervis Ellison.

By making the 1988 Olympic men’s basketball team, Bimbo had taken the measure of himself against the best that college, the NBA, and the world had to offer. The experience let him know that he was capable of playing at the highest levels, and he returned to Blacksburg with renewed confidence.

Tech was returning five of their top six scorers, including Bimbo, Wally Lancaster, Quinton Nottingham, Greg Brink, and Eric Sanders. The only loss from the top six was Tim Anderson, a 9.0 ppg scorer and a valuable, scrappy rebounder who was declared academically ineligible and transferred.

The Hokies were still on probation, though, and therefore were banned from all postseason play, including the Metro Conference tournament. Still, they thought they could put together a good season.

Then the bottom fell out. Tech went to WVU and got destroyed, 101-52, the fifth-worst loss in program history. Booed mercilessly in Morgantown, Bimbo had his second bad game there. As a freshman, he had gone scoreless; as a junior, he went scoreless in the first half, finished 3-of-18, and scored just 9 points.

But of course, no one saw that coming at the time. What Bimbo saw in the moment was a lack of talent, and more importantly, a lack of chemistry.

“We had a lot of issues with jealousy and stuff when I came back [from the Olympics], with Wally,” Bimbo recalls of Lancaster. “It drags the team down. You just don’t get that hundred percent effort. And we weren’t as talented, either. We didn’t really have any dominant big men or a really good big man. I thought we were solid, but at forward and center we didn’t really have any top-notch players.”

Brink suffered a season-ending knee injury ten games into the season, and with Tim Anderson already gone, the Hokies struggled to rebound. They were outrebounded by 5.5 rpg in Metro play, and the lack of post talent meant that defenses could focus on stopping Coles and Lancaster.

Bimbo was getting double and triple-teamed, and banged around by opposing defenses. He and Lancaster started the season out strong, but as time went on, Bimbo’s shooting percentage dropped … and Wally’s fell off a cliff.

In Tech’s first 14 games, Bimbo and Wally shared the scoring load, alternating as the team’s scoring leader in games. But in the last 14 games, Bimbo led the team in scoring 12 times, as Lancaster started to press and put up ill-advised shots.

Lancaster made 10 of his first 20 three-pointers that season,