The offense took a step forward in a 99 play scrimmage in Lane Stadium on Saturday afternoon.

Though the offense was missing some key players due to injuries (Mark Leal, Joshua Stanford and Carlis Parker), other players elevated their game.  The Hokies were balanced, established an effective running game, and showed the ability to hit big plays in the passing game.

All offseason, we’ve talked about the things the Hokies have to do to get better on offense.  To recap, those three things are:

Today we saw the Tech offense take a step forward in all three categories. 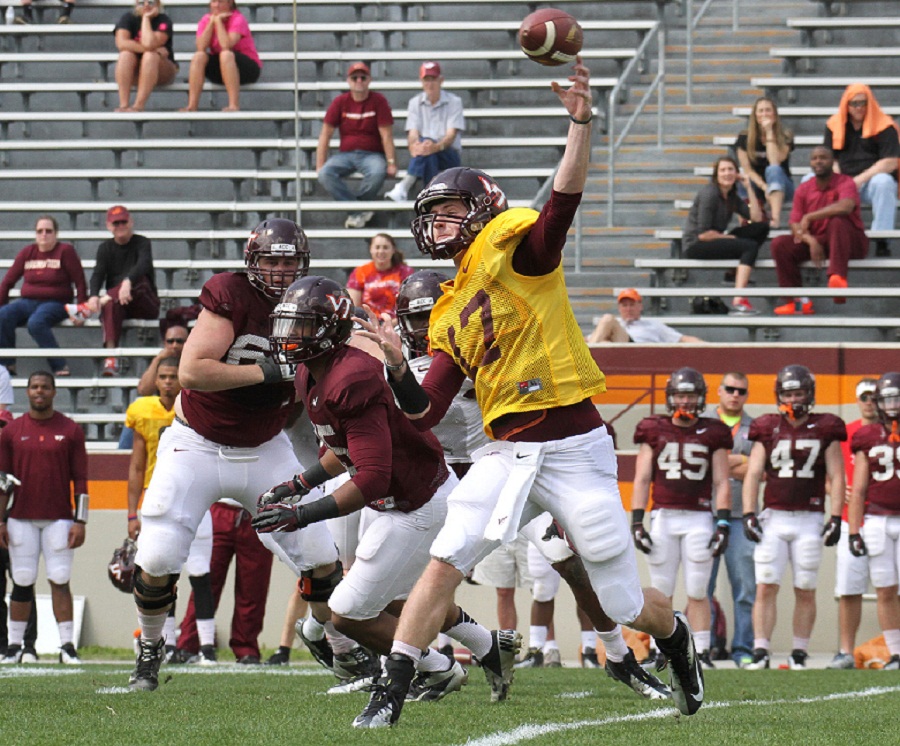 With Mark Leal missing the scrimmage due to a knee injury, Brenden Motley got all the work with the #1 offense.  He had his good moments and bad moments.  He hooked up with Demitri Knowles on a streak early in the scrimmage, and Knowles made a great diving catch for his quarterback.  Motley later hit Knowles on an intermediate route that turned into a long catch and run for a touchdown.

Motley missed a wide open Bucky Hodges on a sure touchdown, and he later overthrew Hodges again on the same possession.  Like many young quarterbacks who don’t have a lot of reps, I think the issue on those plays was anxious, happy feet.  If a quarterback doesn’t get his feet set, he is prone to accuracy issues.

On the whole however, I was happy with how Motley played.  His decision making was very good.  He didn’t throw anything close to an interception, and his decisions were quick, decisive and mostly correct.  He also made all the correct decisions on the speed option plays that Scot Loeffler has added this spring.

Including last week’s scrimmage, Motley is now 17-of-25 for 199 yards with a touchdown and no turnovers.  I’m not privy to how the quarterbacks play on a day-to-day basis in practice, but I believe that Motley has played well enough in scrimmages to put himself squarely in the competition.

Coming into the spring, Motley was an unknown.  He didn’t throw the ball much in high school, took a redshirt year at Tech, and then missed last spring with an injury.  I didn’t know what to expect, but the expectations I did have weren’t high.  He has exceeded my expectations by a mile thus far.  If I were Scot Loeffler, I would tie Motley and Leal at the top of the depth chart at the end of the spring.  That would give those guys a sense of urgency over the summer, and lead to max work ethic in the offseason.

Andrew Ford has improved a ton since the beginning of the spring.  He was “sacked” nine times today (behind the backup OL, and a defensive player only has to get in the general area of the QB to record a “sack”), and he was limited by bad snaps from #3 center Adam Taraschke.  However, once the snaps got better and his protection improved, Ford was very sharp.

It’s hard to argue with 12-of-15, especially when quite a bit of it came against the #1 defense.  His numbers should have been better, but Deon Newsome