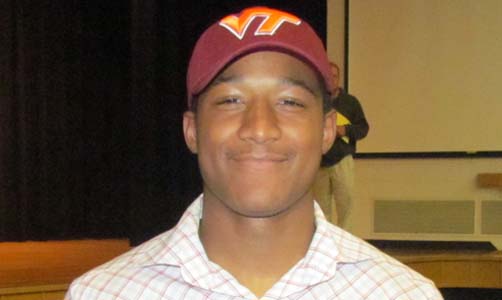 Travon McMillian played quarterback for C.D. Hylton High School in Northern Virginia, and he put up big numbers as a senior.

McMillian is adamant that he wants a shot at quarterback, and the Virginia Tech coaches have promised to give him one.  However, he’ll have to make an impression quickly if he wants to stay at that position.  Tech’s other quarterbacks in camp in August will be Mark Leal, Michael Brewer, Brenden Motley, Andrew Ford and Chris Durkin.  There aren’t enough reps to go around for five quarterbacks, much less six.

My guess is that Scot Loeffler will evaluate McMillian against Andrew Ford and Chris Durkin for about the first week of practice.  If Loeffler feels like he can beat those guys out in the future, then McMillian will stay at quarterback.  Otherwise, he’ll be moving to defense.  Though I do think McMillian has the arm strength to be an effective quarterback in the right system, this article will operate under the assumption that he will move to defense.  No program needs three quarterbacks in the same class.

It’s really impossible to evaluate Travon McMillian as a defensive player when 100% of the plays on his highlight film are of him playing quarterback.  Nevertheless, there are still some physical traits that stand out that should help him be a good player...