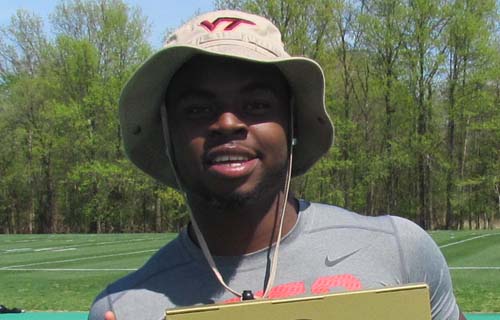 CJ Reavis is one of the top defensive backs in the state of Virginia and in the Mid-Atlantic region. His offer list reflects it. Miami, Nebraska, UNC, Ohio State, Oklahoma, Tennessee and Wisconsin were among the major programs to offer Reavis, but he selected Virginia Tech early in the process.

As a recruit, Reavis was instrumental in reaching out to other Hokie targets and trying to talk them into coming to Blacksburg. Like James Gayle and JC Coleman before him, I think he’ll be the player at summer camps who is always spending time with potential prospects and trying to convince them to come to Virginia Tech. I think he’ll eventually develop into a leader of the defense. He’s not afraid to open his mouth.

Click here for his Hudl highlight clip. Just looking at his length, size and the way he moves, I think Reavis is ideally suited to play safety on the short side of the field. For the Hokies, that means he fits best at the rover position.

Run support: Granted, his highlight film isn’t particularly long. However, he does display a willingness to come up and hit. He looks ideal for run support on the short side of the field.

Versatility: Unlike some others, I don’t think he has a chance to be a cornerback in college unless he plays a ton of zone coverage. However, he could also fit in at whip or free safety. Virginia Tech likes to recruit versatile defensive backs, and Reavis is no exception.

Size: Reavis is already a big guy for his age (I’m not sure that 6-0, 190 is completely accurate for him), and by the time Mike Gentry gets his hands on Reavis, he should be an intimidating guy.