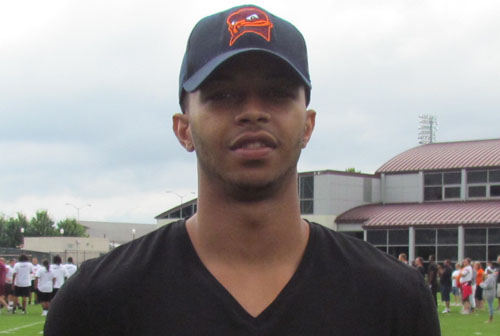 Raymon Minor‘s academics were always in question, but he still had scholarship offers from Tech, Nebraska, Ohio State, Clemson, Iowa, Miami, UNC, Wisconsin and others.  Imagine how many more offers he would have held had he been in good academic standing?  Minor began his high school career at Patrick Henry (Ashland), but transferred to Benedictine and reclassified, thus he was never eligible for prep school.

Minor was one of Tech’s top recruiting targets of the 2014 class.  He could play effectively at wide receiver or linebacker at the college level, though the Hokies will place him at linebacker when he enrolls.  I think he’s a very good fit for the backer position.

Here’s a link to Minor’s Hudl highlight video.  Pay attention to how he lines up for Benedictine.  It’s very similar to Tech’s backer position.  He sometimes lines up outside the tackle box in a true outside linebacker position, and sometimes he’s lined up as an inside linebacker.  That’s exactly what Bud Foster does with his backers.

Minor has physical traits that make him a good fit for backer.

Size: Minor has the frame to play the backer spot at over 230.  He is rangy and he will benefit from time with Mike Gentry.

Outside-In and Inside-Out skills: On film, Minors shows the ability to attack from the outside-in, as well as the inside-out.  That’s very important, because as a backer he’ll line up both inside and outside.

Overall athleticism: His athleticism is more evident on his highlights as a wide receiver.  He can run by defensive