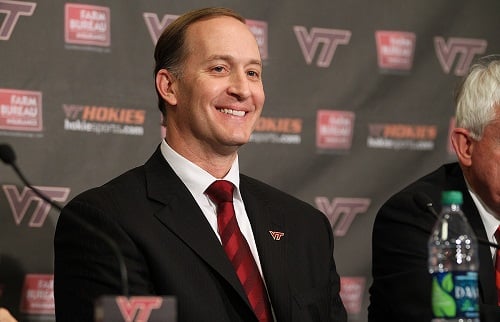 1: Who is in Whit’s ear re: “the basketball problem”? I’ve read across various sites and boards that the situation is even more screwed up than a 20 loss season shows it to be (if you can believe that).

Chris Coleman: As far as who is in his ear surrounding the specifics of the Seth Greenberg firing, James Johnson hiring, and everything that went on behind the scenes during that time period? I really don’t know. Whoever he asked is going to have a slanted viewpoint, depending on whether or not they are anti-Seth or pro-Seth.

Do you mean the in-state recruiting discussion? Cvillehoops13, who is plugged into the AAU scene and Virginia high school basketball scene, asserts that the current coaching staff has burned a lot of bridges in the state of Virginia and surrounding regions. The issue with that is that there just aren’t that many Virginia Tech guys in high positions in basketball. Tech has been a football school for a long time now. How many persons with any stature in the AAU world actually went to Virginia Tech or care anything enough about Virginia Tech basketball to call Whit Babcock and let him know what is (allegedly) going on there?

To me, the situation isn’t that dynamic. It’s simple. Do you believe James Johnson is the guy to compete with the top coaches of the ACC? If you do, then you definitely retain him. If you don’t, then the quicker you can hire someone else, the better, and that’s likely to either happen this year or next year in my opinion (and again, I hate saying that, but it’s my job).

Whit Babcock was the AD at Cincinnati, and the Bearcats have an outstanding program. He was at Missouri, who is no stranger to the NCAA Tournament. He was at West Virginia when the Mountaineer program was built under John Beilein. Even if he knows nothing about Seth Greenberg or Jim Weaver, and he doesn’t know anything about the alleged in-state recruiting problems,