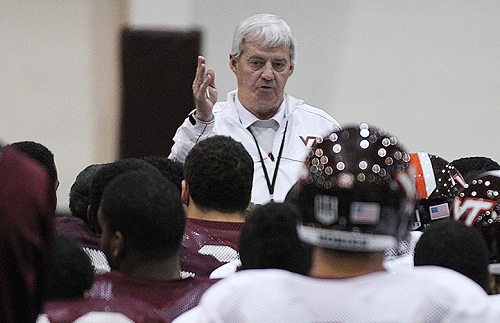 1) How would we be able to use Frank Beamer’s inevitable retirement in a positive recruiting manner?  How do we go about countering someone who would negatively recruit using his retirement?

Chris Coleman: You bring up an excellent point and I’ve mentioned it before.  You can bet your house that opposing schools are starting to use Frank’s age against him on the recruiting trail.

“If you commit to Virginia Tech, you’ll have a new head coach and a new coordinator at some point during your career there.”

It’s negative recruiting, but I think it does have a good chance of being true.  I’m of the opinion that whoever is signing with the Hokies from this point forward will be playing for two different coaching staffs.  I don’t know exactly when Frank will hang them up, but he’ll turn 68 this season, and I don’t see him pulling a Bobby Bowden or Joe Paterno.

How do you counter it if you are recruiting for Virginia Tech?  Turn the tables.

That part is also true.  If I committed to Alabama, I wouldn’t necessarily expect Nick Saban to be my coach for the next 4-5 years, nor would I expect Kirby Smart to be my defensive coordinator.  Spurrier can’t last another 4-5 years at South Carolina, can he?  When will Chad Morris get a head coaching job, and when he does, can Dabo Swinney overcome the loss of Morris, Boyd and Sammy Watkins?

That’s just the way it is in college football these days.  The stability that Virginia Tech built over the years was very unique.  We were living in our