The Hokies are on their third offensive line coach in as many seasons.  What will Stacy Searels have to work with this spring and fall?  Today we’ll take a look at Tech’s returning personnel on the offensive line.

Virginia Tech’s only loss up front is Andrew Miller, the tough right guard who was a good run blocker when healthy, and overall the Hokies’ best offensive lineman.  He will be missed.  There are plenty of bodies to replace him, and I don’t think anyone with the possible exception of Jonathan McLaughlin are guaranteed a starting spot this season.

Though there are plenty of options from a numbers standpoint, exactly how good those options are remain to be seen.  Some of Tech’s linemen could play guard or tackle.  Some are center/guards.  Some are tackles only, some are guards only, while a couple of them are centers only.  It will probably take some time for Stacy Searels to get a handle on what he’s working with, though I kind of doubt that we’ll see as much movement as we saw with Jeff Grimes last year.  He’ll have Scot Loeffler to rely on, and Loeffler knows his personnel well by now.

First, let’s take a look at the offensive tackle positions.  Note that the heights and weights have not been updated since August.  They will be updated again when spring practice begins. 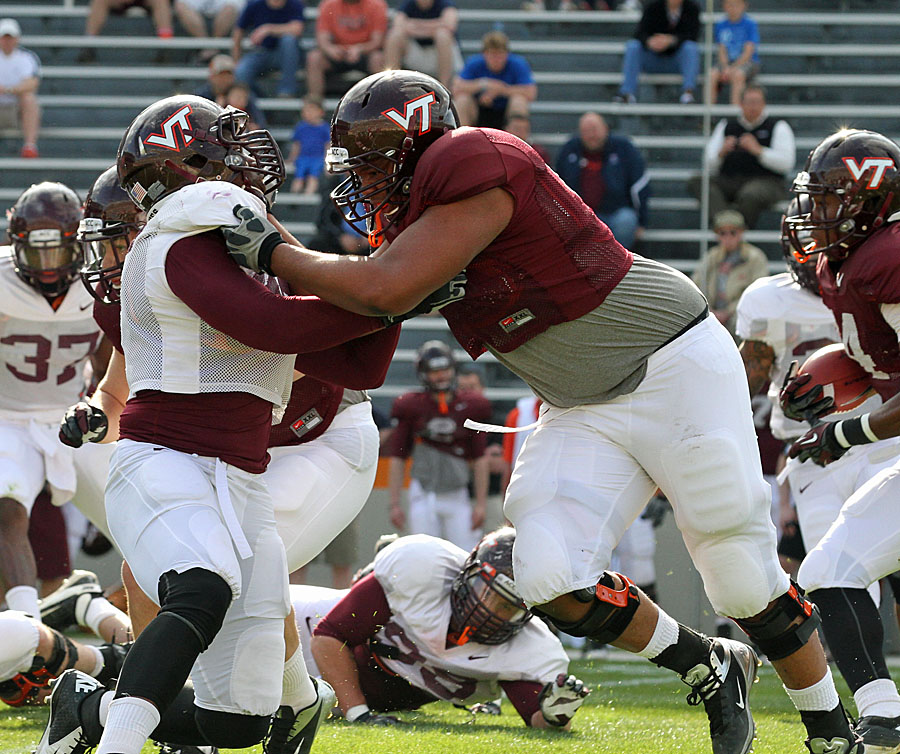 Jonathan McLaughlin (6-5, 313, So.) started every game and played every meaningful snap at left tackle this past season.  He had his ups and downs, but overall it’s tough to expect a true freshman to play much better.  Some guys just slip through the cracks during the recruiting process, and McLaughlin did.  I think his year at Fork Union helped him