The Hokies just wrapped up their 2014 recruiting class. We’ll take a broader view of a few topics in today’s article, including the 757, Aaron Moorehead’s amazing contributions in his first year, and how Bryan Stinespring has helped change many of the strategies of Tech recruiting.

Coming up next week, we’ll be starting a series of scouting reports on every single recruit of the 2014 class.

Virginia Tech is fine on the Peninsula, but they are locked out of the southside of the 757: Virginia Beach, Norfolk, Portsmouth, etc. We’ve talked about why in a couple of articles over the last couple of years. Mark Giannotto of the Washington Post talked to some of the involved parties for an article last week, though he’s only scratching the surface.

Doing this job for as long as we’ve done it, Will and I have had the chance to talk to plenty of people about this and many other subjects over the years. I could tell you some specific stories that I’ve heard about the Thoroughbreds, but there’s no point. All you need to do is see this: 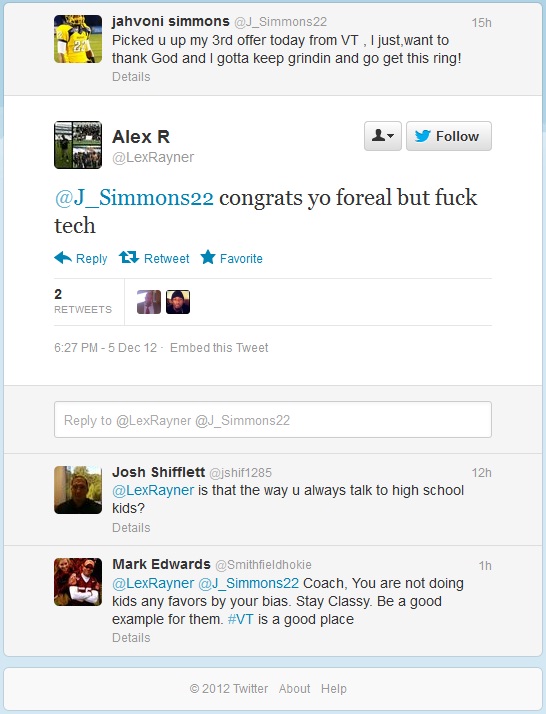 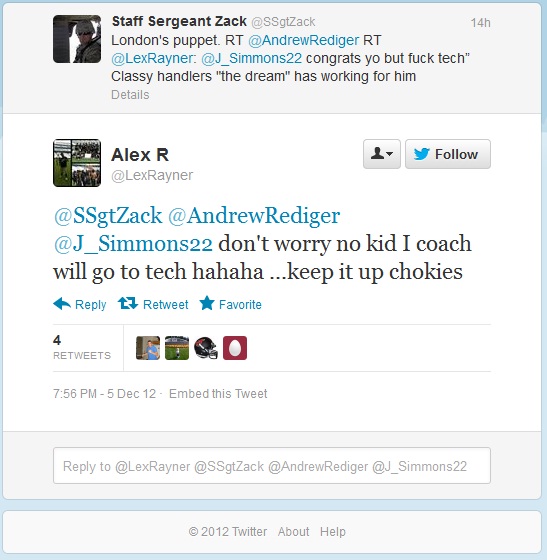 Alex Rayner is the head coach of the Thoroughbreds. He’s also an assistant at Bishop Sullivan High School, which is where Thoroughbred wide receiver and UVA signee Jamil Kamara transferred to from Princess Anne, after he was unsuccessful in transferring to Lake Taylor and several other schools.

On the first Tweet, Rayner is talking to Jahvoni Simmons, a 4-star linebacker from Ocean Lakes High School in Virginia Beach. Simmons was considered a Tech lean early in the process, but as time has gone by Tech has dropped from his list and he now has a top four of Clemson, ODU, Tennessee and UVA.

The second Tweet speaks for itself. Anybody who feels that strongly is going to put up some serious roadblocks between the 757 and Blacksburg. Tech isn’t getting anybody from Alex Rayner and Lee Snead anytime soon.  He said it directly: “No kid I ever coach will go to Tech.”

I could go into more detail, but I don’t want the rest of this article to be lost with people arguing over the 757. Instead, I want to point out a few things:

1: Carson Cutler’s quote from Giannotto’s article (Stinespring “came in here all cocky. When Newsome wasn’t getting the guys that they felt they should get, Bryan basically came in and said: ‘This used to be my area. He don’t know how to work it.’ Basically threw him under the bus.”) makes it seem like Tech’s other coaches have been well-received by the Thoroughbred coaches, and that they only have a problem with Stiney. That’s not true. Curt Newsome couldn’t get anything accomplished with those guys. Over the past year, Tech tried to make some inroads with Cornell Brown, but his presence was rejected as well.

2: The relationship was never too good between Tech and the ‘Breds, but it got even worse when Tech chose not to offer quarterback Corwin Cutler (son of Carson Cutler, who is involved with the Thoroughbreds). I personally liked Cutler more than Bucky Hodges and Carlis Parker as a pure quarterback, but Cutler was going to have trouble qualifying. In fact, he’s still at Fork Union trying to get his test scores up. There were no qualifying issues with Hodges and Parker, so Tech went with those two guys rather than wait to see whether or not Cutler qualified.

Cutler grew up a Tech fan, and the Hokies were the early leader (according to this Rivals pay article with quotes from his