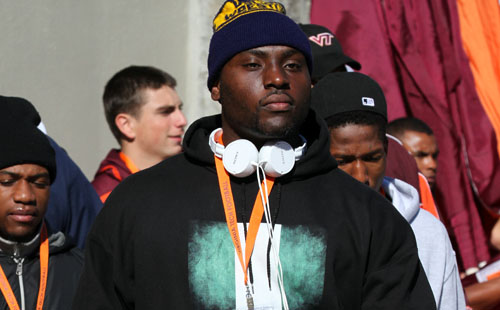 I went to Saturday’s hoops game against Maryland, and Virginia Tech fans wanted to talk about two things: Tech’s chances of signing Derrick Nnadi, and WHAT WHIT BABCOCK IS GOING TO ABOUT THE BASKETBALL PROGRAMS.

Alas, I have no inside scoop about what’s going on in Derrick Nnadi‘s mind, so that “section” of this article is going to be brief.

Back when I first started TSL, I used to get excited about individual recruits. If you go WAY back, you remember that my first “favorite recruit” was 1996 signee Jeremy Kishbaugh, a 6-3, 230-pound LB/FB out of “national high school champion” (whatever that means) Berwick High School in Berwick, PA.

When Doug Doughty reported Kishbaugh’s commitment, he had a quote from Kishbaugh’s high school coach describing him as “an animal.” My man-crush immediately ensued, and I was convinced that Jeremy Kishbaugh was critical to Virginia Tech’s future football success.

Never heard of him, huh? Exactly.

For the record, Kishbaugh blew out his knee while he was still in high school and never even enrolled at Tech. The Hokies did okay without him, going to the national championship game in what would have been Kishbaugh’s redshirt-junior or true senior year.

So is Derrick Nnadi the key to the entire 2014 recruiting class? Of course not. He’s one guy, and the class is 25 strong and counting.

But it’s what Derrick Nnadi represents that is important