On paper, Virginia Tech should have a strength on offense next season: tight end.  Of course, we would rather that strength be quarterback, running back or offensive line, but for lack of any other options, I’ll certainly take tight end.  It’s a step in the right direction. 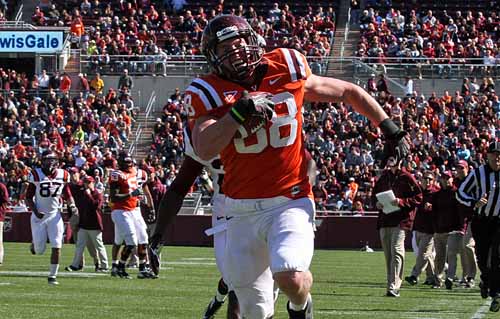 Malleck (6-4, 249, r-Jr.) was all set to be Tech’s starting tight end for the second season in a row, and Scot Loeffler was very excited about his potential.  However, a preseason shoulder injury forced surgery and he was lost for the season.

Catching 17 passes for 174 yards, Malleck did pretty well for a true sophomore in a Virginia Tech offense that neglected the tight end (until Scot Loeffler arrived).  He also showed potential as a perimeter run blocker.  On J.C. Coleman’s two long touchdown runs against Duke in 2012, it was Malleck who threw two critical blocks on the edge to spring the big play.

It was clear watching Spring practice last season that Scot Loeffler had a big role envisioned for Malleck, and that there were no other tight ends on the team outside of Kalvin Cline who could do what Malleck could do in the passing game.

With Malleck back for 2014, the Hokies will have two legitimate receiving threats at tight end.  Perimeter blocking should also be improved.  Malleck obviously missed a season’s worth of weight room work, but he has the whole offseason to get back to form and improve on where he was in 2013.