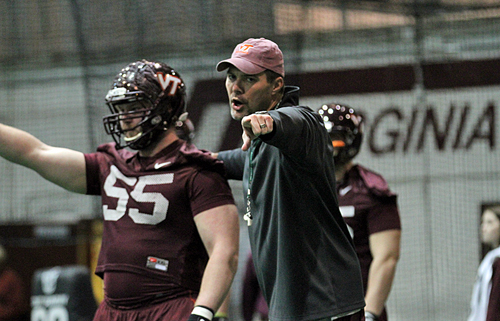 Virginia Tech fans – and perhaps Frank Beamer himself – have been living in a bubble for years.  The coaching stability in Blacksburg was so strong that Beamer, the program and the fan base never had to deal with the coaching turnover that other programs go through on a year to year basis.  Here we sat in Blacksburg, VA, where we were seemingly untouched by what goes on at every other program in the country on a yearly basis.  It was easy to get spoiled.

That’s begun to change over the last few years.  Since the end of the 2010 season, five Tech coaches have either been fired or not retained: Billy Hite, Jim Cavanaugh, Curt Newsome, Mike O’Cain and Kevin Sherman.  A sixth coach – former offensive coordinator Bryan Stinespring – is now recruiting coordinator.  Note that every single one of those coaches were removed by Frank Beamer against their will (with the exception of Billy Hite, who didn’t want to coach anymore).

As far as coaches leaving on their own, you’ve got to go all the way back to the offseason between the 2005 and 2006 seasons.  Tech had a number of staff changes in that offseason, and not all of them were voluntary.

Obviously that was a good coaching staff.  Danny Pearman was also on that staff, but he was fired by Frank Beamer in that offseason.  He is now on the offensive staff at Clemson, and I’ve always heard through the grapevine that Kevin Rogers considered Pearman to be the best X’s and O’s coach on that Tech offensive staff.